Ever had fried plantains topped with guacamole and other deliciousness? Well I used them as a the buns for an epic burger! 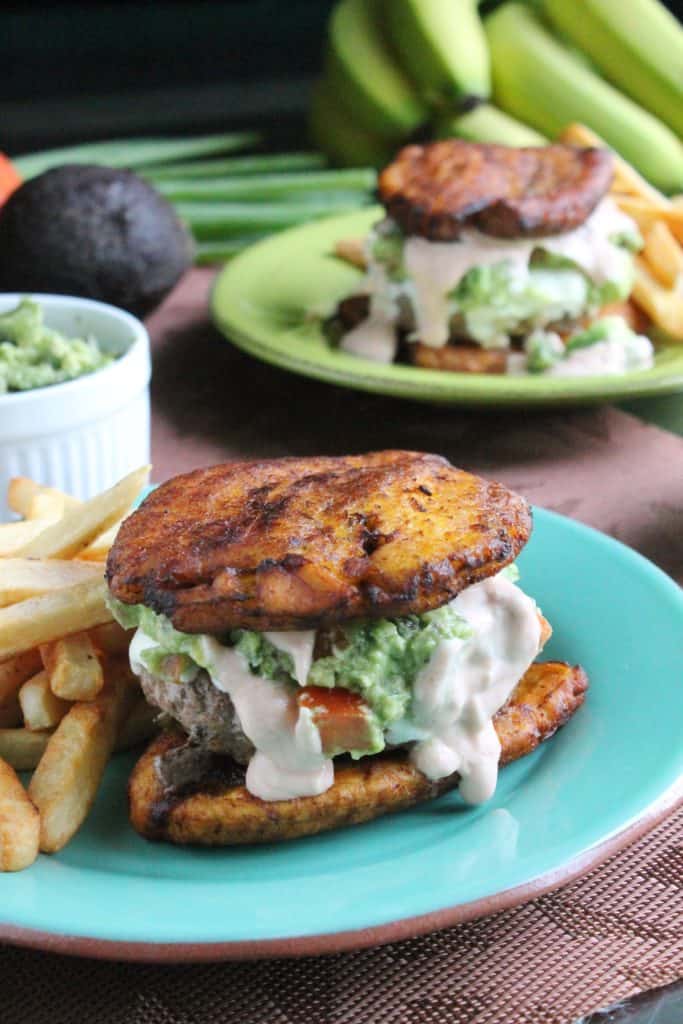 THIS POST IS PART OF THE #BURGERMONTH CELEBRATION HAPPENING ALL MONTH LONG ON GIRLCARNIVORE.COM AND ACROSS THE INTERWEBS ALONG WITH 100 OTHER TALENTED FOODIES!! MAKE SURE YOU FOLLOW #BURGERMONTH TO CATCH THEM ALL!

Remember when my friend’s mom taught me how to make Colombian patacones? Well I finally got the nerve to try making them myself. While my first batch burned, likely due to the oil being too hot and not paying close attention, the second bath came out great! But instead of topping them the traditional way, I decided to use them as the buns to a burger. 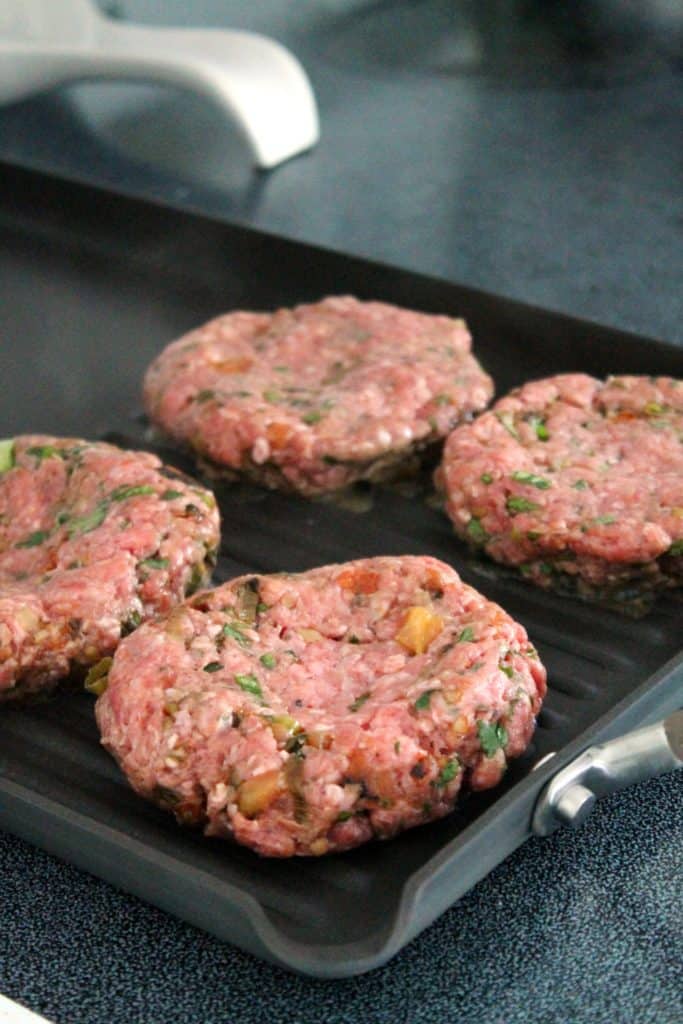 The idea for this burger started by signing up for the annual Burger Month blogging event hosted by my BA friend Kita (Girl Carnivore / Pass the Sushi). At first I had a hard time coming up with something I deemed worthy of the occasion. Then I contemplated a sushi inspired burger complete with a rice bun but decided there was too much of that buzzing around the internet lately and wanted to do something more novel. Then at lunch one day, Juan was telling me how he made burgers with arepa buns and I immediately made the jump to patacon buns. And he immediately requested that he get one. 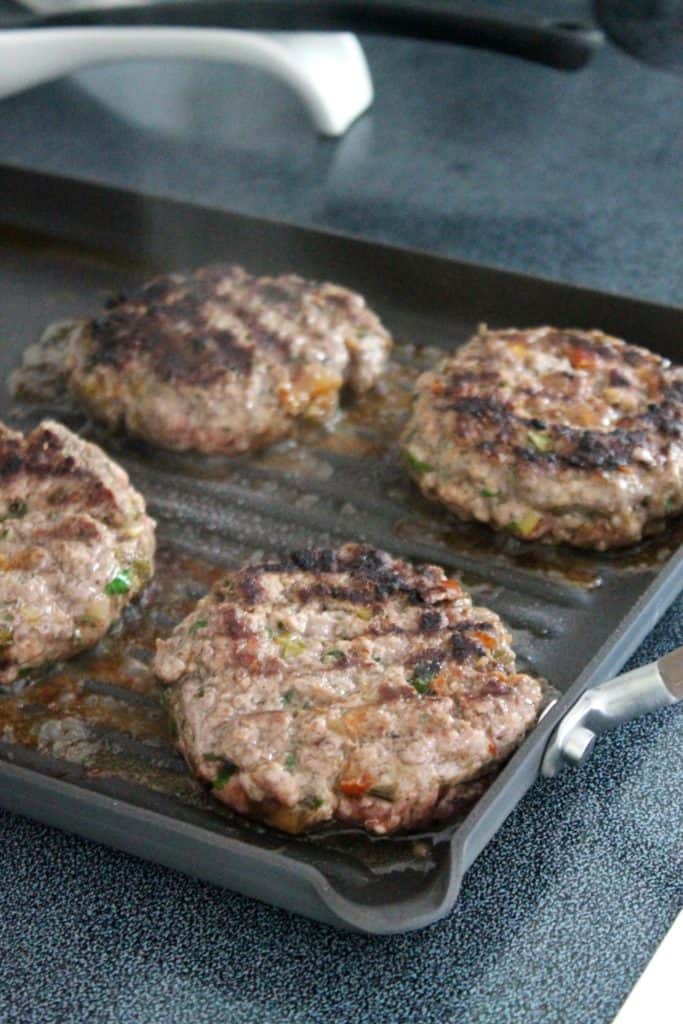 The end result was worthy of the first day of Burger Month. A crispy yet dense, slightly sweet, “bun” sandwiched around a juicy burger topped with melted mozzarella, fresh guacamole, and a pink sauce that reminds me of McDonald’s secret sauce – with booze in it. And yes, I saved one for Juan to get his Colombian stamp of approval! 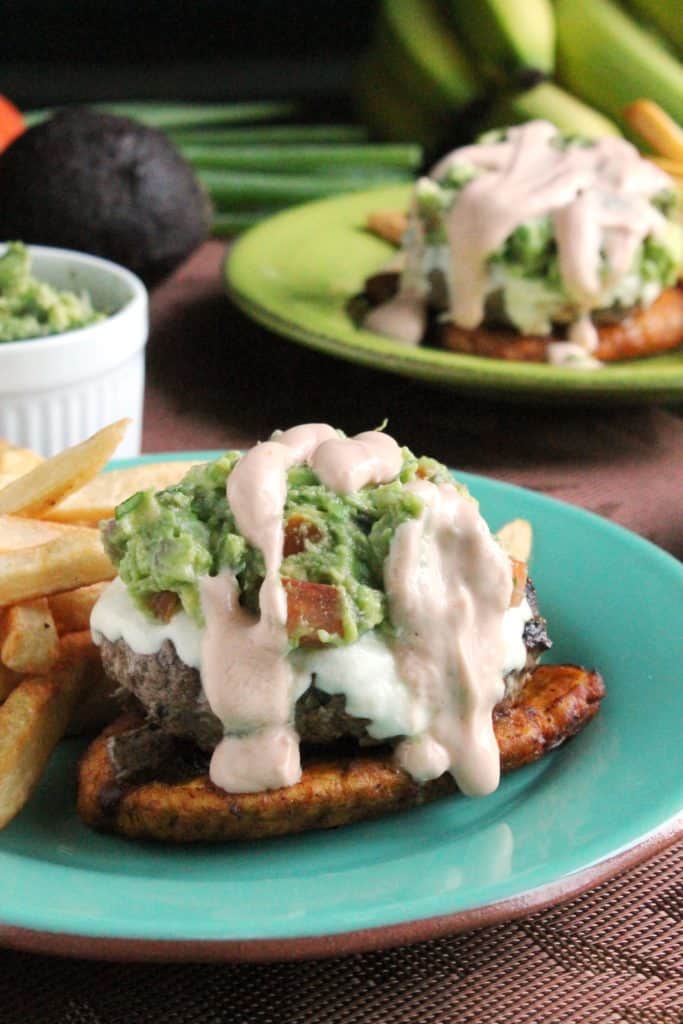 WHILE THIS EPIC BURGER CREATION IS MY OWN FOR #BURGERMONTH 2017, I WANT TO THANK American Lamb Board, Anolon.  Beef, It’s What’s For Dinner, Char-Broil, Curly’s BBQ, Cuttingboard.com, Melissa’s Produce, Primal Stone, Spiceologist , Thermoworks , & Veal Made Easy FOR THE KILLER GRILL PRIZE PACKAGES! HEAD ON OVER TO BURGERMONTH.COM TO PUT YOUR NAME IN TO WIN!

American Lamb Board – (ALB prize boxes 5 lbs of ground lamb, an apron and a meat thermometer 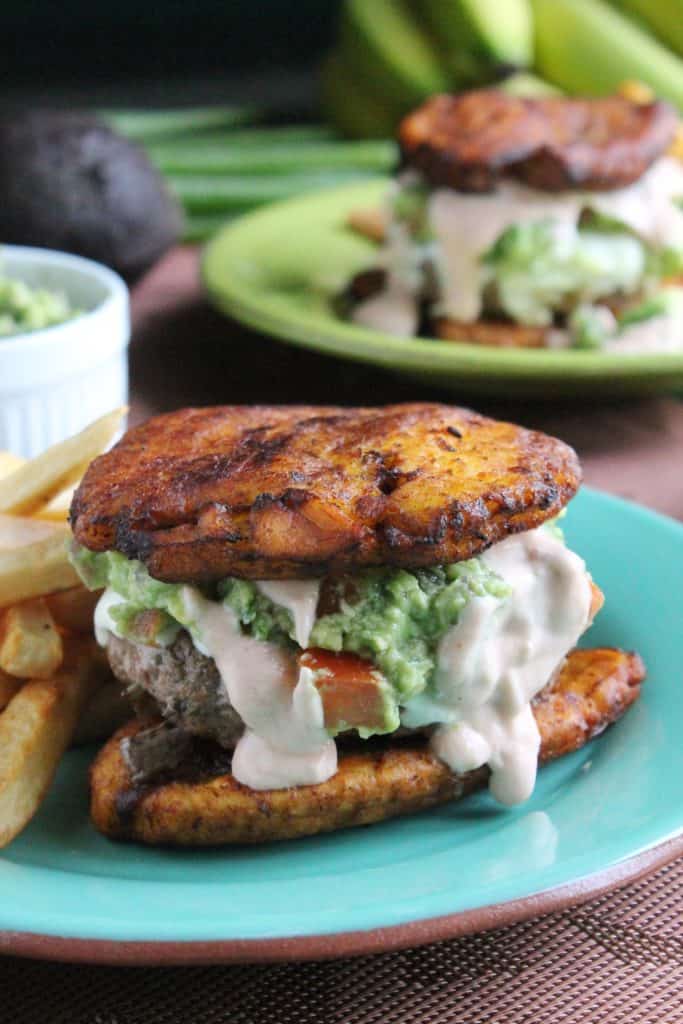 4 green plantains, peeled and cut in half crosswise

Disclosure: I was provided with a complimentary non-stick double grill pan from ANALON. I was not compensated for this post. All thoughts and opinions remain my own.

Gluten-Free Brownie for One

These burgers sound great. Don’t know if they’ll get made, but I really like the idea of how you did them.

Thanks! They are definitely more work than the usual burger but worth it if you like fried plantains!

Burger month is off to a delicious start! Nom. :)

OMG, these look so pretty and definitely healthier too. I loved the idea of using the plantains instead of buns for that glutenfree meal and I’d totally try this one.

Since they are double fried I’m not sure how much healthier they are, but definitely gluten free!

These burgers sound soooo good, and how creative to make those buns!! I have weirdly never tried plantains, I really need to change that!

I don’t think it’s that weird that you haven’t had them before but you should definitely try them!

I love that these burgers use plantains for the bun! This is so creative and looks delicious!!

WHAT?? Genius to use plantains as your bun! And the guac on the burger…my stomach is rumbling like a thunderstorm! Yum!!

Thanks so much Colleen! I wasn’t sure if people would think me crazy but the feedback has been great!

I have only eaten plantain as a kid when I was a kid. Can’t remember if I liked it or not.. From your recipe I can tell that I think I will like it.. Very creative recipe.. time for me to explore..

Patacones are the BEST! We eat these all the time but I have never thought to use them as a bun replacement! Genius!

Heck yea I hope you try them!

This is such a creative recipe! my Mom loves plantains. i have never seen them used in this way. It’s great, especially for those avoiding carbs!

Definitely gluten-free but I wouldn’t exactly call it health food ;-)

If you like patacones then you definitely should try them!

That is such an innovative burger and I love how you have used plantains in the recipe. Its interesting how you have come up with this combination.

Thanks! I think my Colombian friends are rubbing off on me.

YUM! I’ve never had a Patacon Burger before, but looks delicious. Excited to try this one out soon!

I am not sure many people have, it’s definitely not a popular search item on Google. I hope you try it!

I love plantains (called saba bananas in the Philippines) and grew up having it for breakfast, lunch and even dinner! But I haven’t tried it in a burger! What a yummy idea!!

I could totally eat plantains any time of day!

I’ve used plantains, but never like this! These sound amazing. From the “bun” to the sauce, absolute deliciousness!

Time to try it out!! Thanks Amanda.

Amazing! You have raised the bar from day 1! Nice job!

I felt the pressure to kick it off with a bang! Glad they did the job. Thanks Lisa!

This is so very creative! I have never tried making plantains at home, but I sure enjoy them while I am on vacations to warm destinations.

Thanks Jodi! I clearly don’t go on tropical vacations enough as I think I’ve had them more at home (or at a restaurant in town) than anywhere else!

I’ve never had plantains of any kind, but oh my WOW, this burger looks and sounds flavor packed, Erin! Shared to Cooking with Chef Bec on Facebook!

Thanks so much Becca! I was so thrilled with how they turned out.