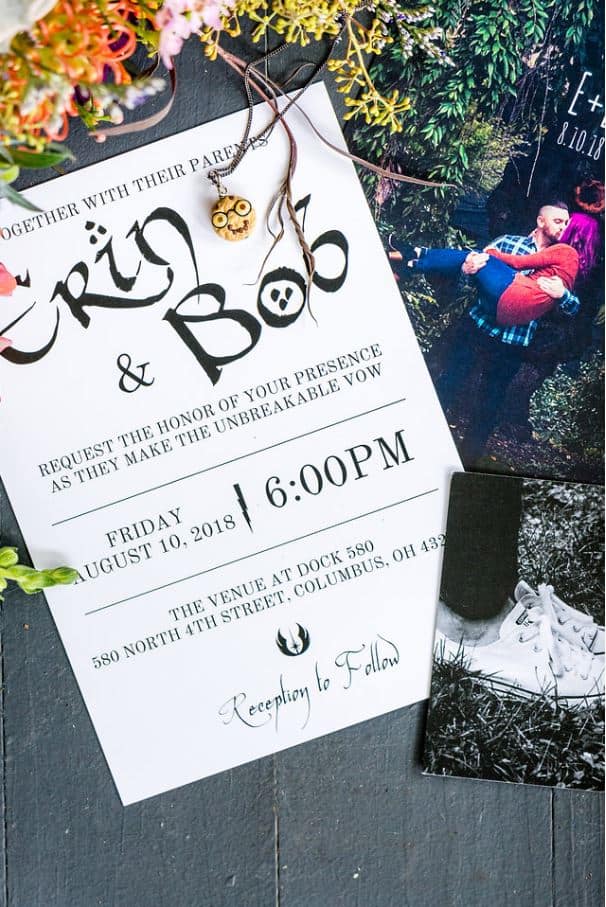 Alright guys, it’s time to reveal some of our wedding photos! It was damn near impossible for me to narrow it down to the scads I am sharing so imagine how many there were to start with, but I am in no way complaining about having more than enough photos. If for some reason the ones I am sharing are not enough, you can head on over to Kita Roberts’ photography website for more. Heck yea she was our photographer! All the photo credit and praise goes to her (and yes I got permission to post these). 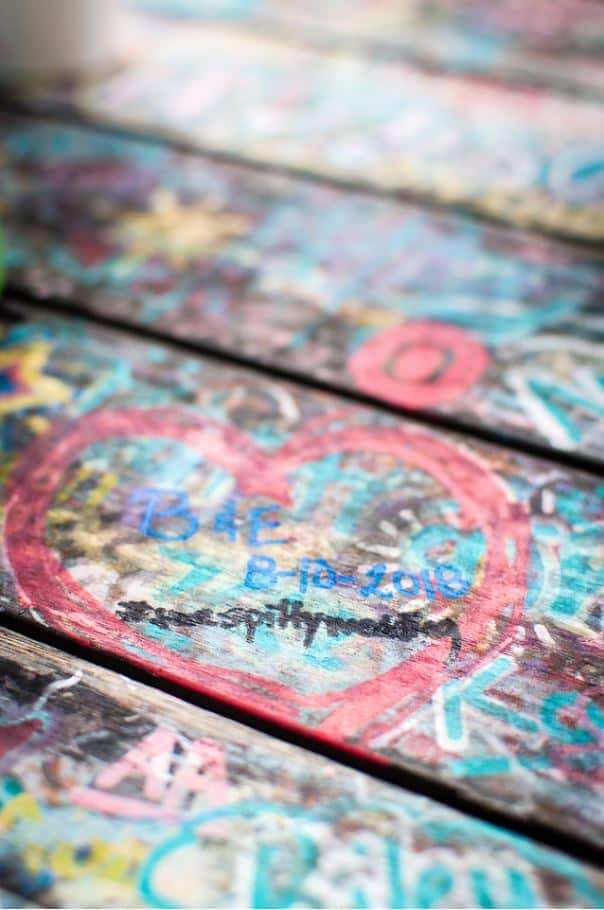 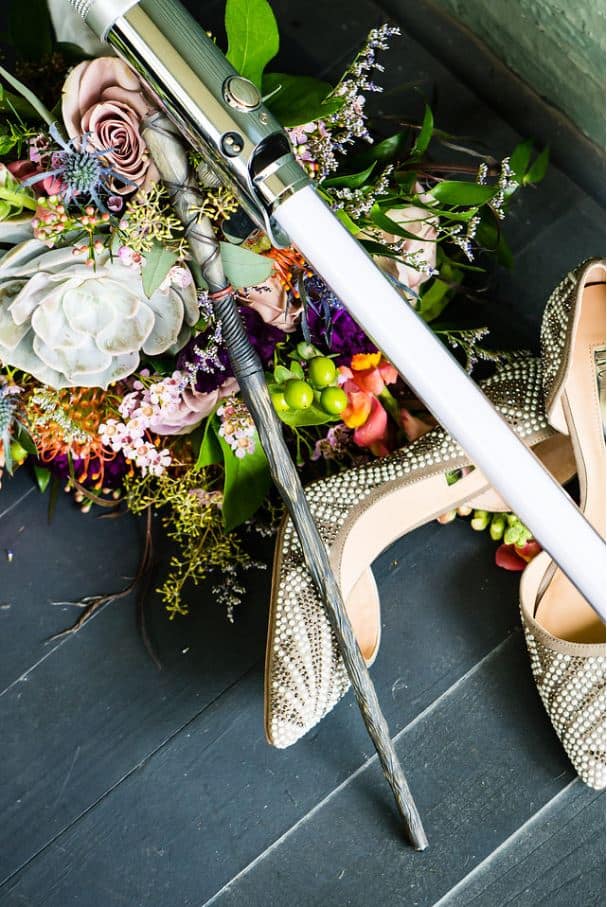 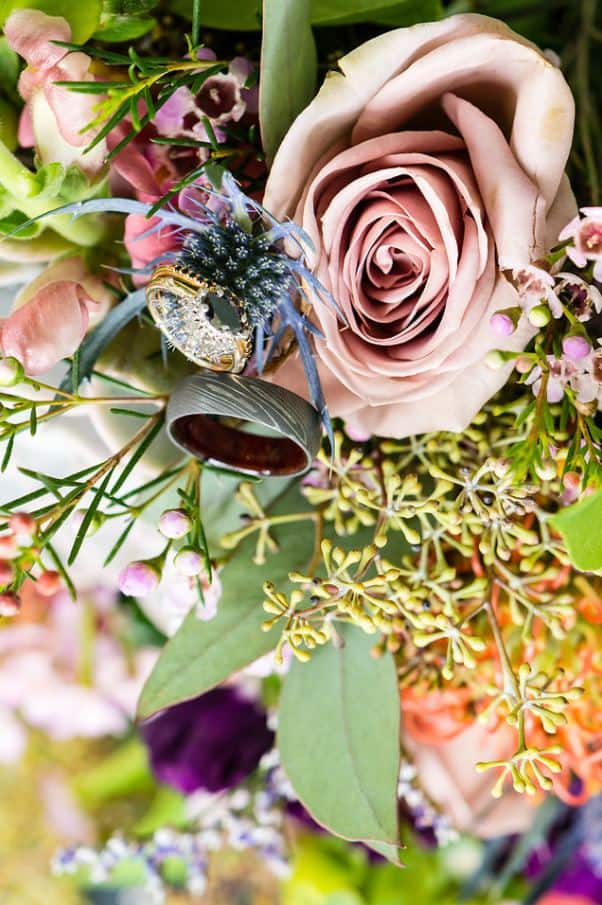 In case you didn’t notice from the invite, we snuck in some nerdy elements everywhere we could without being overly obnoxious, starting with the fonts on our invites which included Star Wars, Lord of the Rings, and Harry Potter. All of which were also incorporated into our ceremony script but again not completely obvious if you aren’t familiar. Granted our wand and light saber were not quite as subtle but they made for a great photo op that I share a little later. 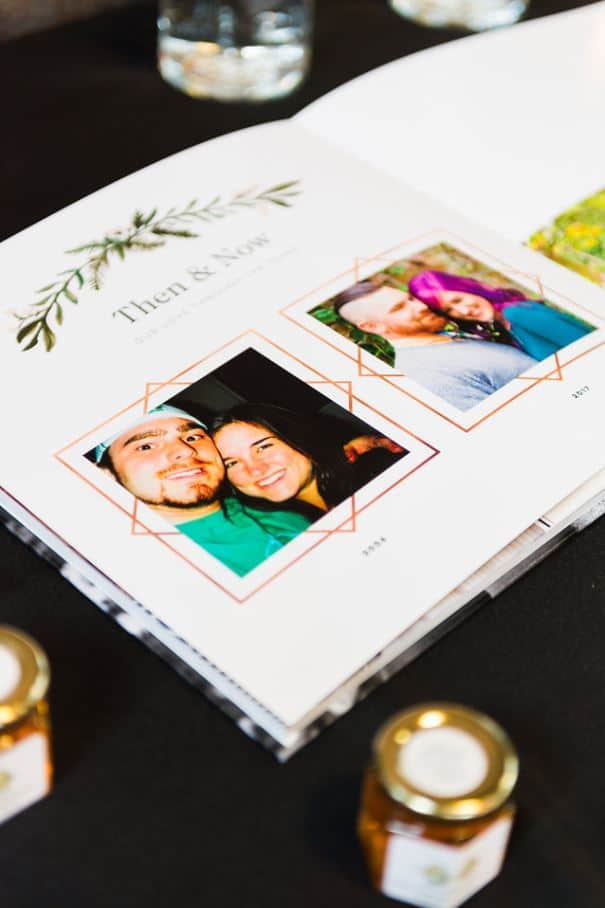 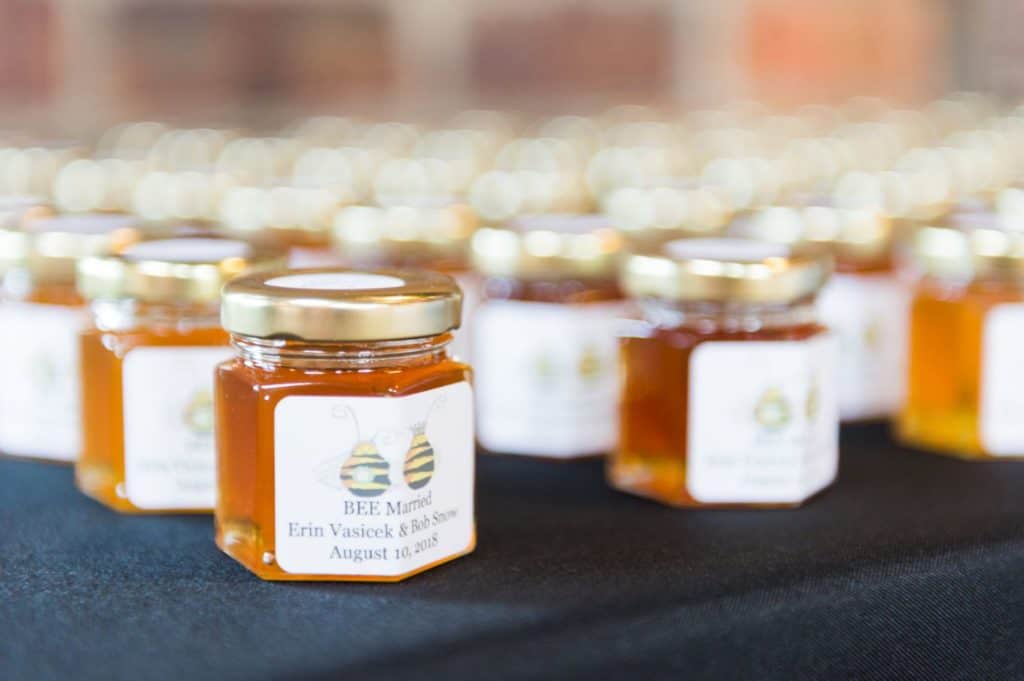 For the decor, as I mentioned in the DIY post I compiled a lot of family photos along with photos of Bob & I over the years we’ve known each other (since 2001 but we didn’t date until over a decade later) for our photobook which I made through Shutterfly. It was fun adding different idea pages for people to comment on along with a Mad Libs page. For our escort cards, we used jars of Winter Park Honey owned by my Aunt & Uncle which also serves as wedding favors. Heck yea two for one! It was also a generous wedding gift from them as well. Each jar had our names and date on it and then we added guest names with table assignments to the top. 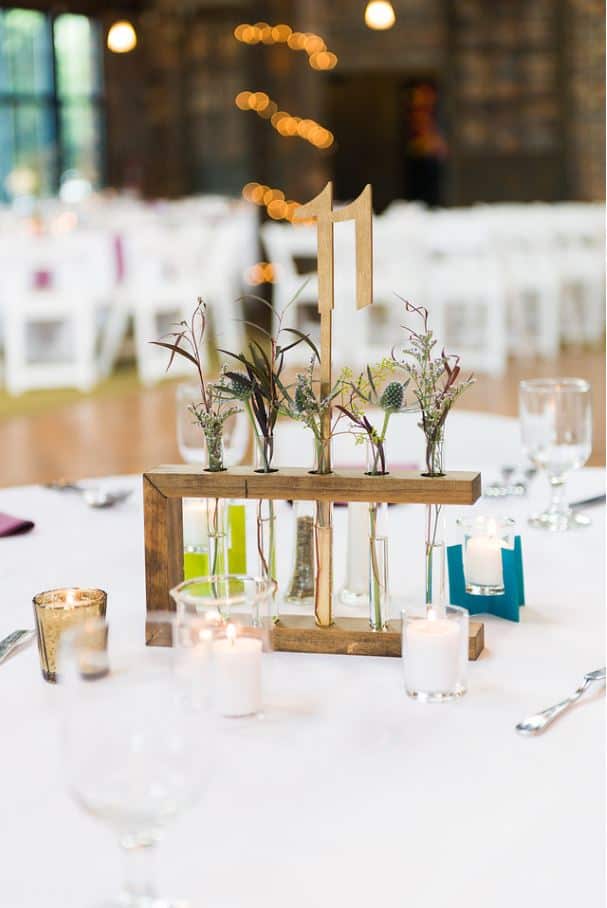 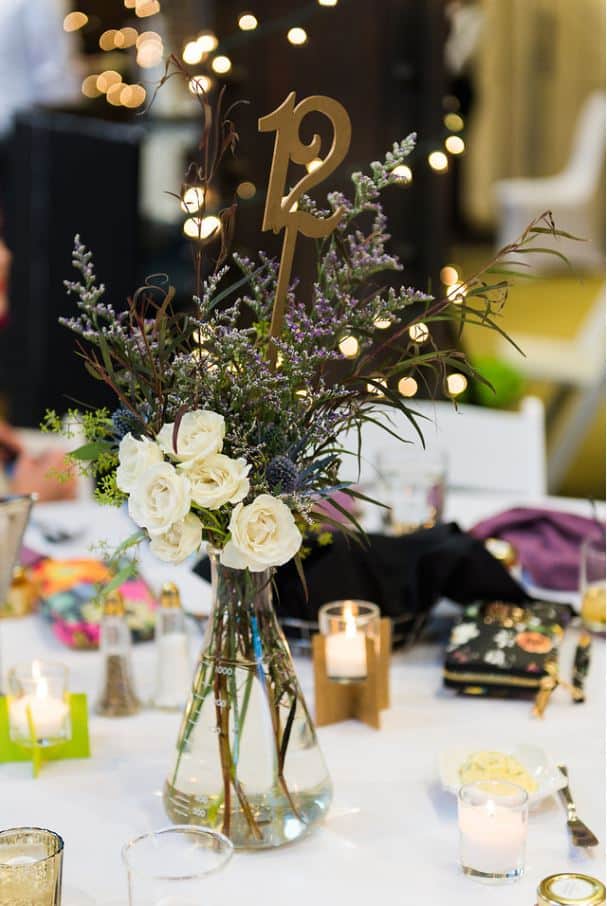 You now get to see all those DIY projects in action! Look at how cute those test tube racks look with flower in them! We also bought some lab glassware for some of the vases and votive holders to supplement our DIY creations. And of course those table numbers that I spray painted gold fit perfectly into the vases. Although somehow people said they had a hard time identifying the table numbers. Haha there’s always something!

Side note: the “champagne” flutes pictures below were an engagement present from Bob’s sister, which we used to drink Elevator root beer out of (one of my favorite locally made root beers) 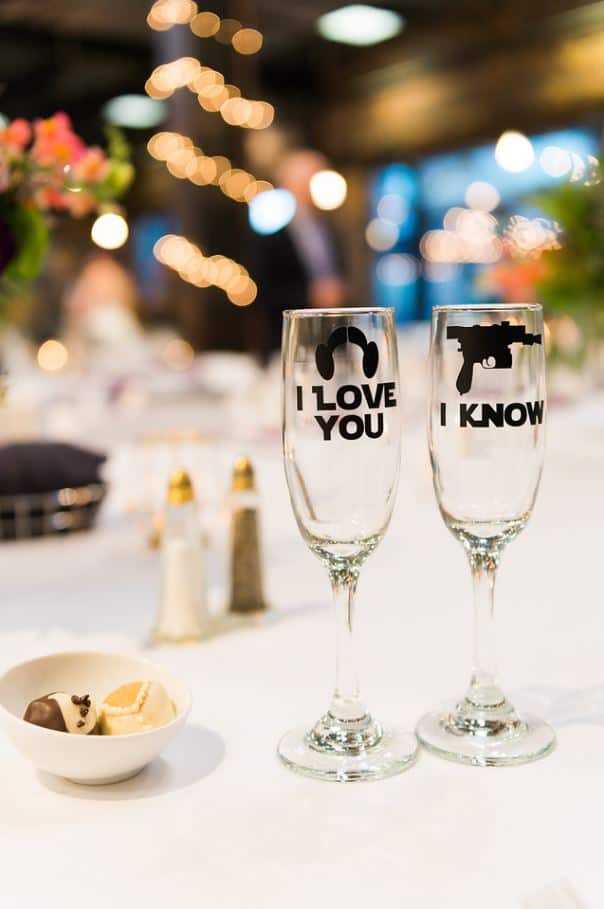 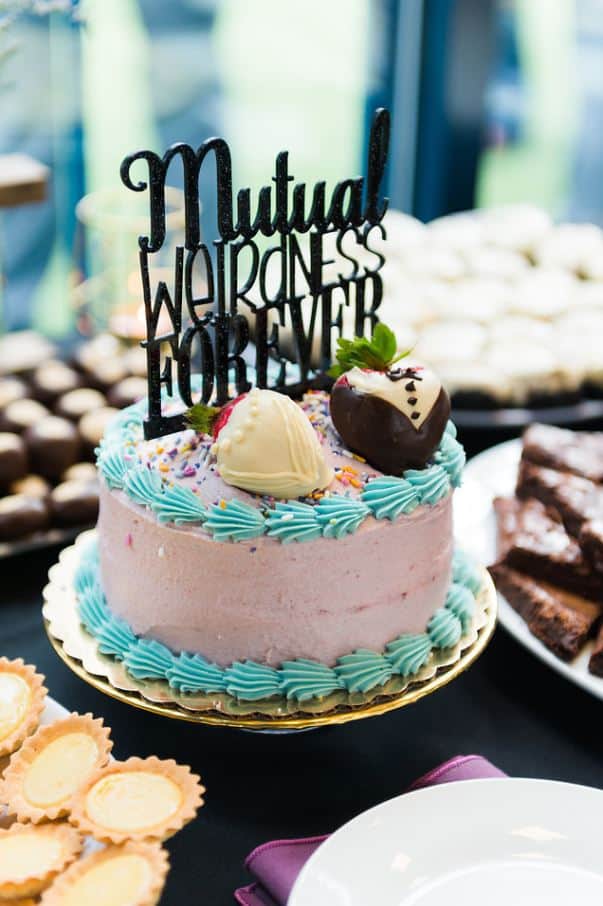 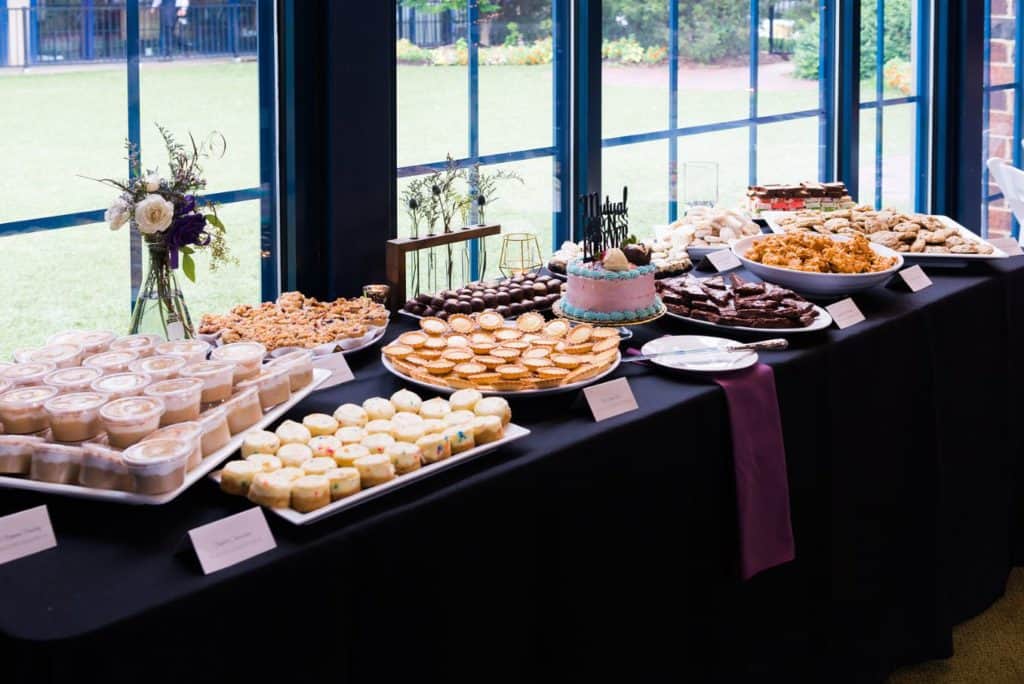 I didn’t have a lot of strong opinions during the wedding planning but one thing I did was dessert. We narrowed down our venue choices based on those that would allow us to supply our own alcohol but also to bring our own desserts – even homemade desserts! One bakery told us to plan 3 small desserts per person. I think we ended up with almost 6 per person and it’s a good thing we went overboard because we have almost nothing leftover at the end of the night! The only reason I got to eat any of it was one of my thoughtful bridesmaids boxed one of each up into the Chinese take-out containers we provided at the end of the night. But enough about decor and on to the photos of us! 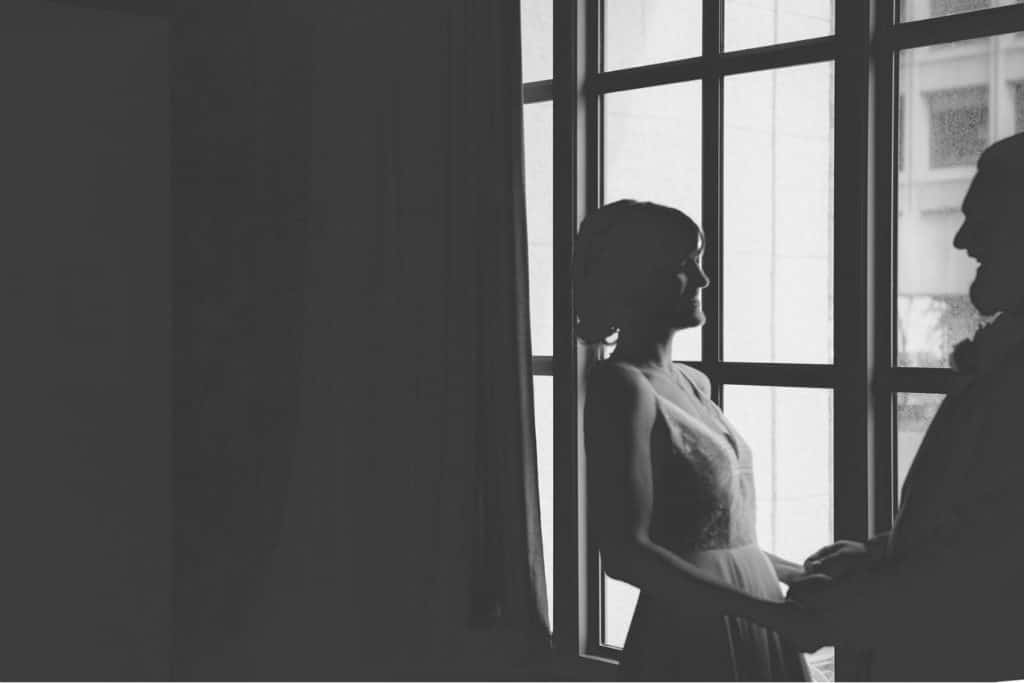 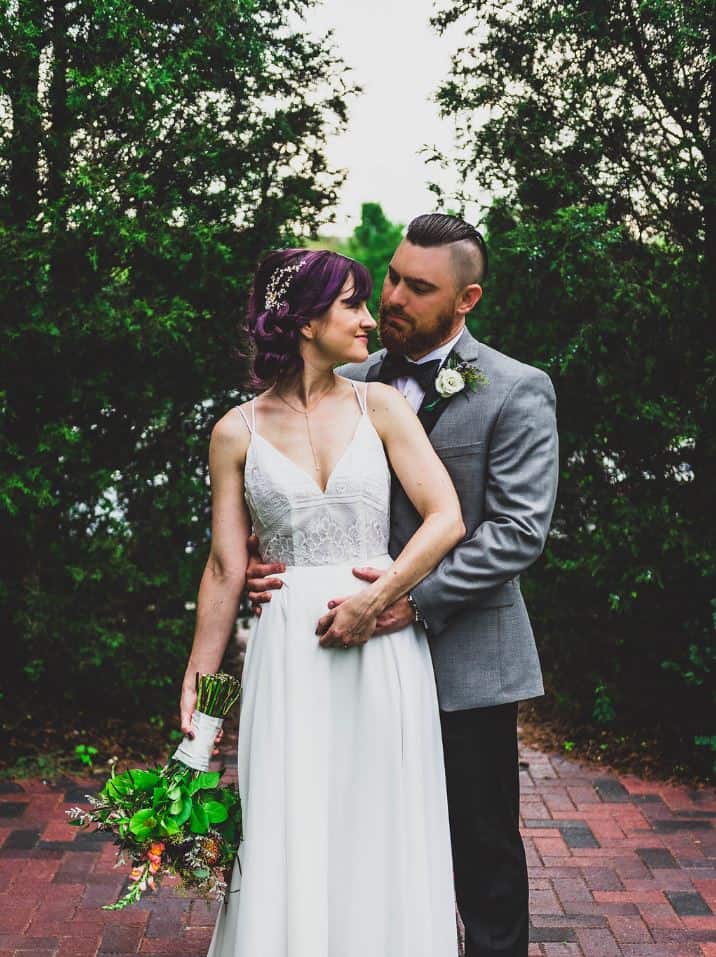 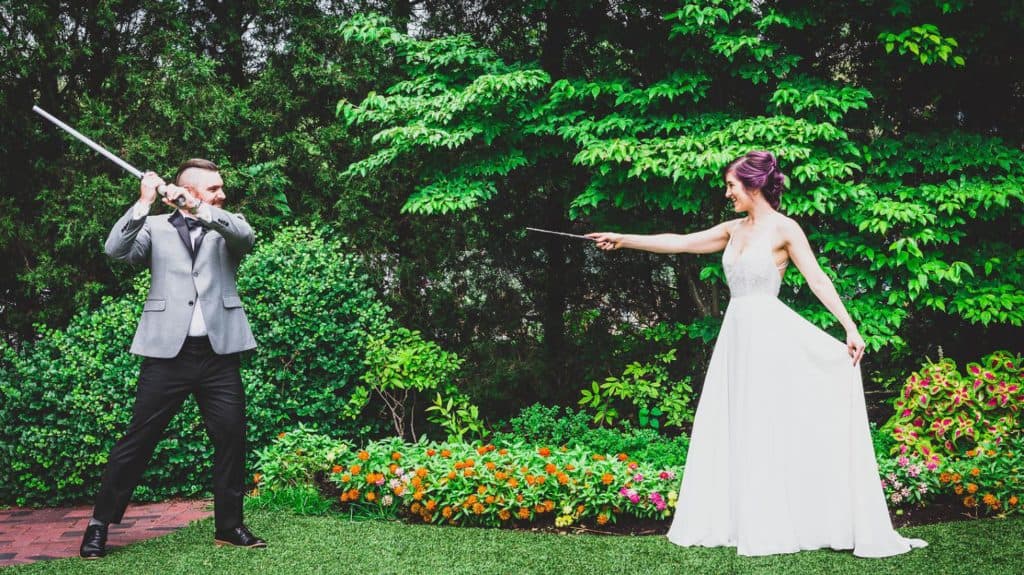 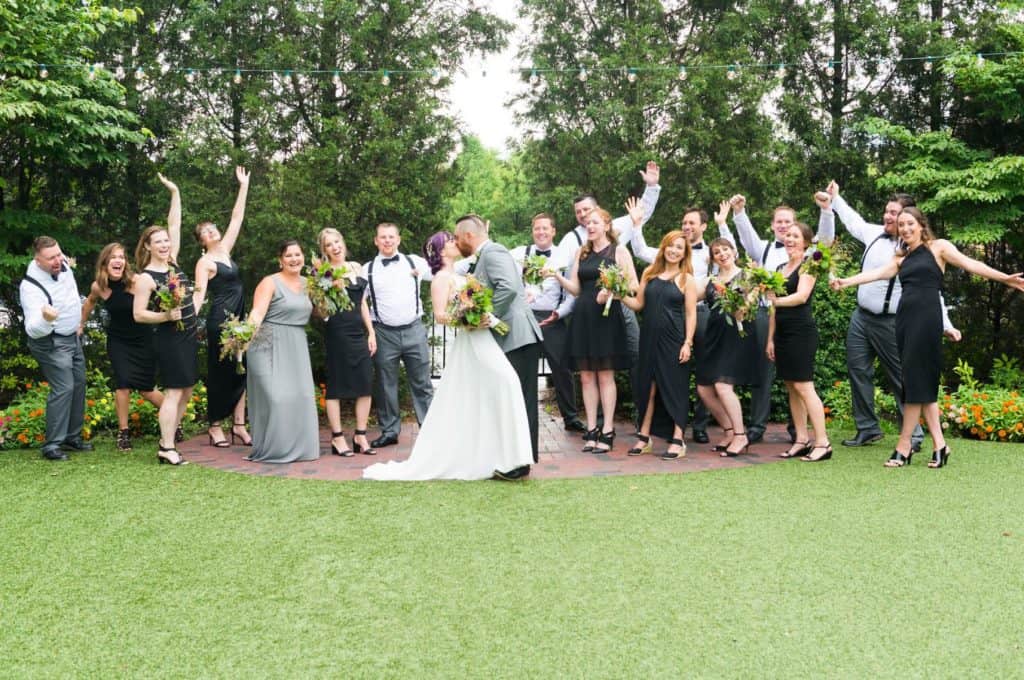 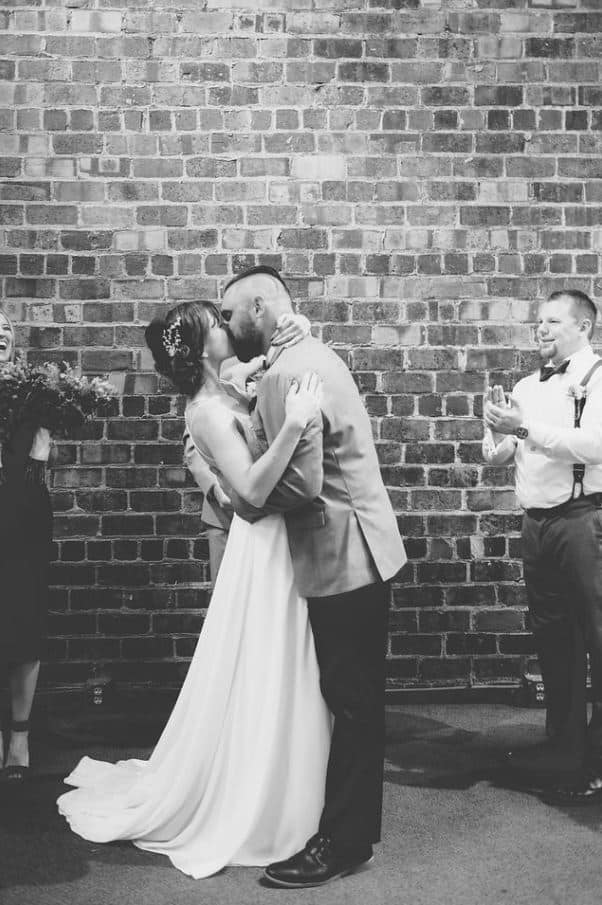 We were very determined to not take any photos during cocktail hour so that we could actually enjoy it (and you’ll see why in a minute) and that’s exactly what we did. Almost all of our group photos, including family, were taken before the ceremony happened and it was definitely one of our best decisions. Since it was raining, we had to switch our first look reveal location from a garden into the lobby of incredibly Hotel Leveque (which we would later stay in for our wedding night), but we got some great shots in there. We then moved to the venue to take some more photos before the guests arrived and thankfully the rain at that point at stopped. We thought we would luck out and be able to have the ceremony outside after all, but much to my dismay a thundering black cloud was on it’s way so we moved everything inside. And it most definitely did pour. Of course as luck would have it, the rained stopped after the ceremony, but it allowed us to take a few more photos outside after all. I know I said we didn’t want any photos after the ceremony, but guys we have the Columbus mobile zoo during cocktail hour and got to have our pictures taken with a couple of the animals! So worth it! 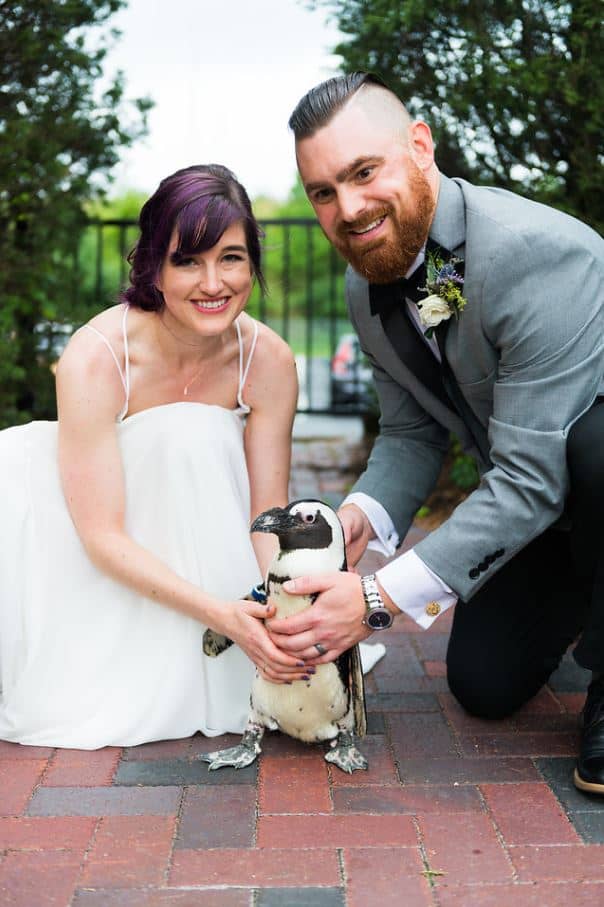 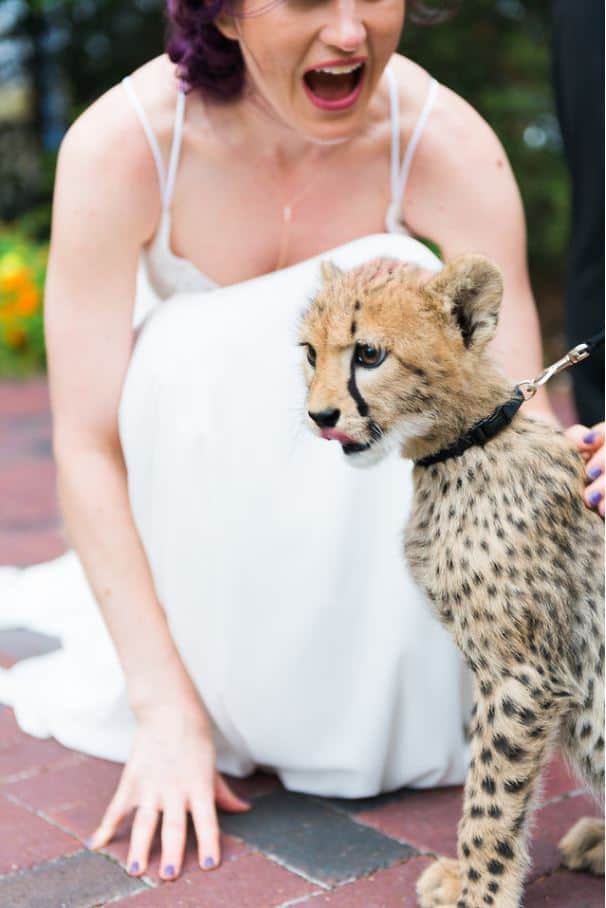 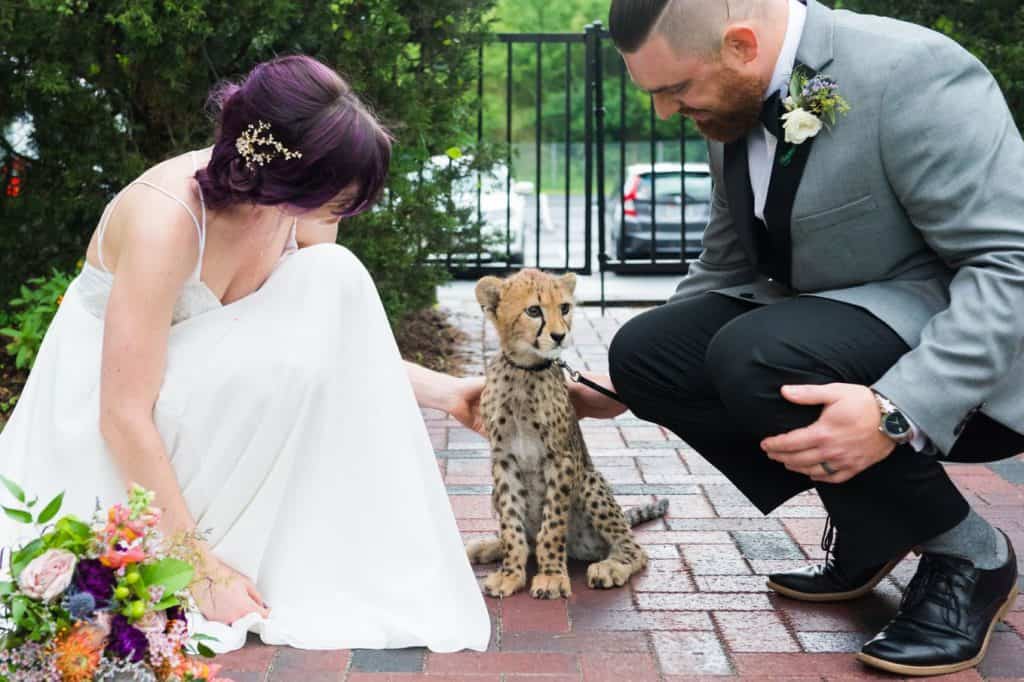 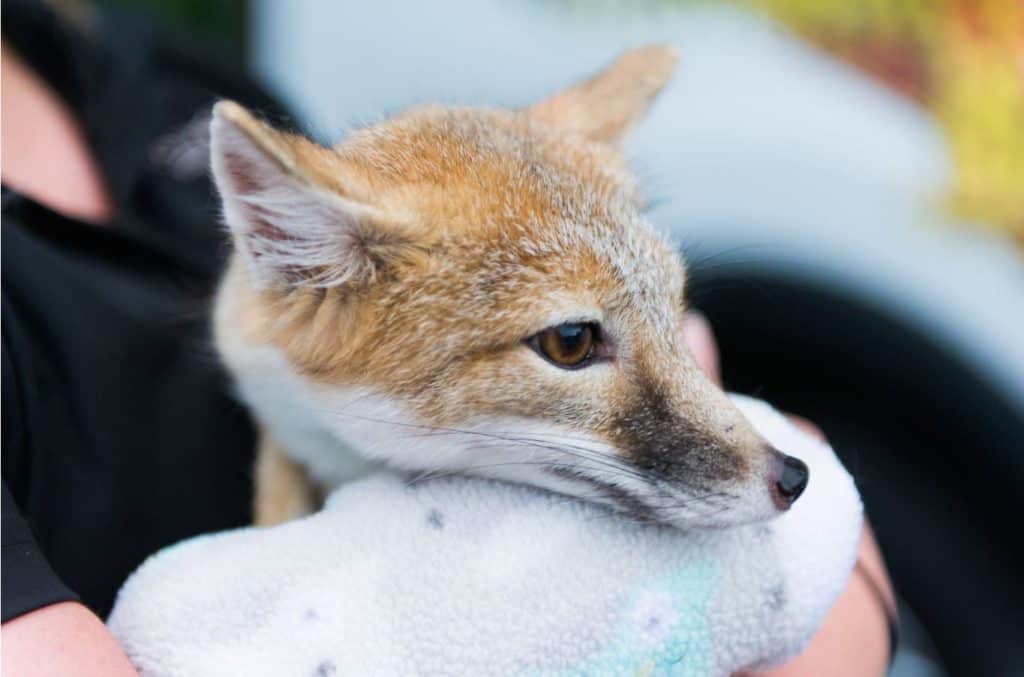 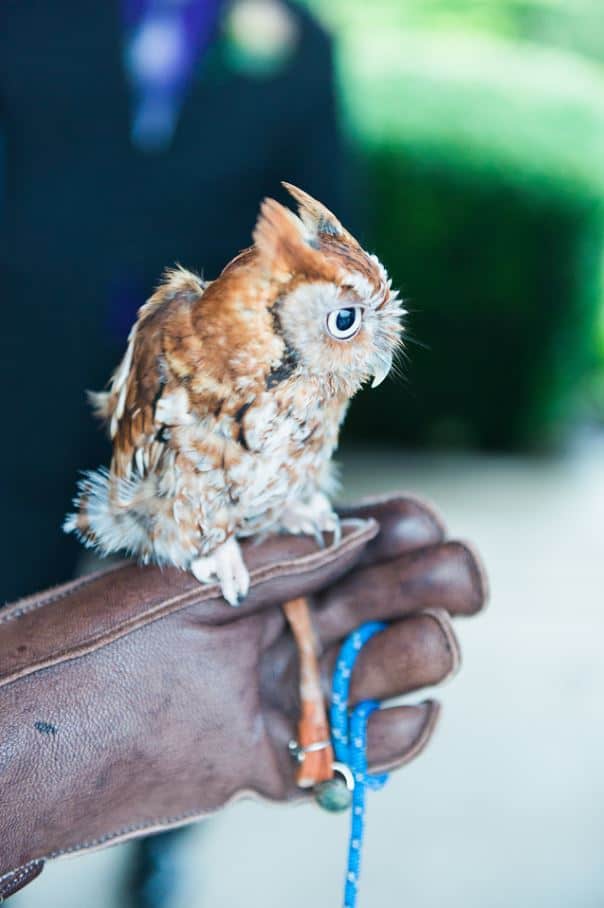 Can you tell how freaking excited I was based on that second picture!? We originally had our fingers crossed that they would bring the baby kangaroo that I’ve seen at previous events, and at first were bummed to hear it would not make an appearance, but when they turned the corner with not one but two baby cheetahs we about lost our minds. There was also a penguin, fox, a tiny owl, and a sloth. We could have gotten pictures with them too but we needed to start mingling with humans. But first, we had to grab a gourmet ice pop from the J-pops cart we had set up next to the bar!

Another side note: the zoo was another thing I wanted at our wedding because we originally met back in highschool while volunteering at the zoo in their Zoo Teen summer program. 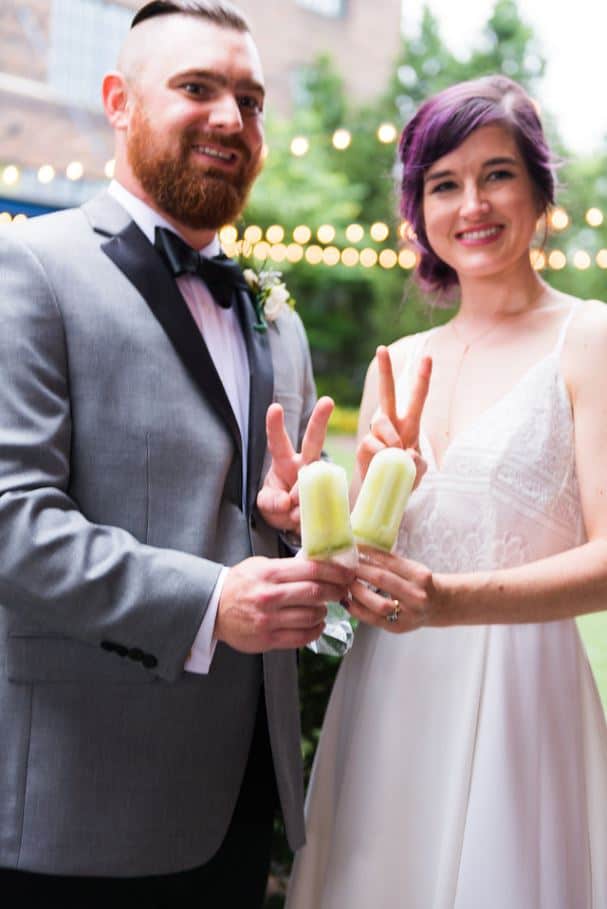 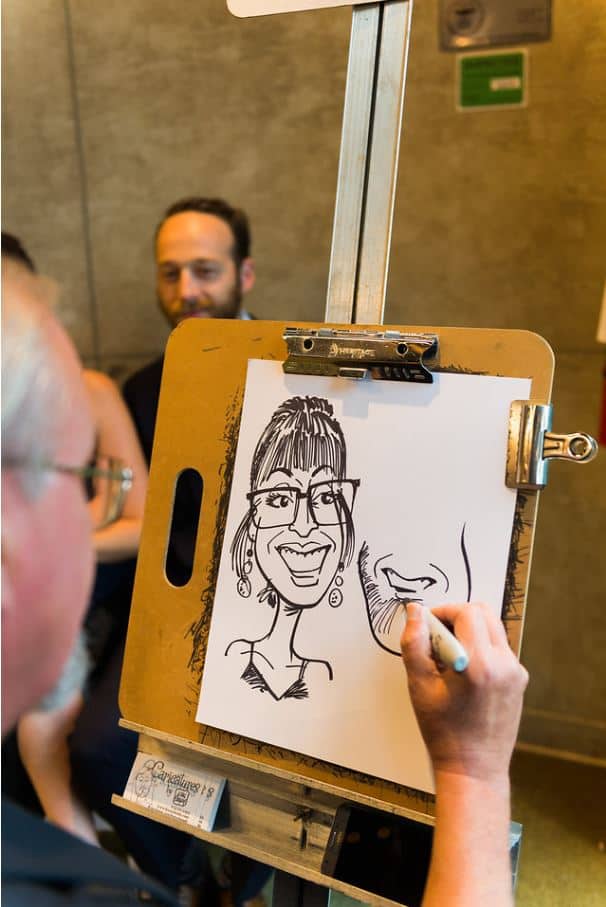 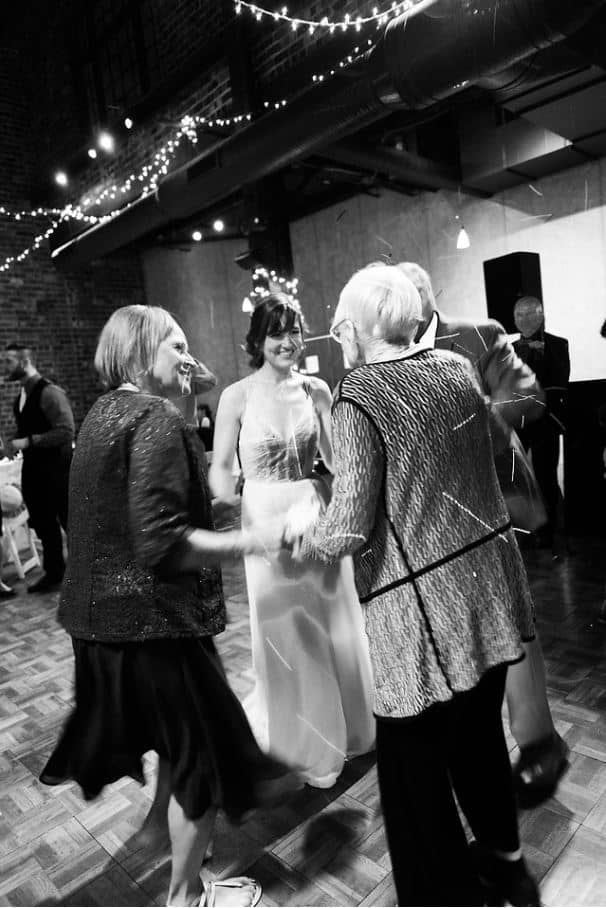 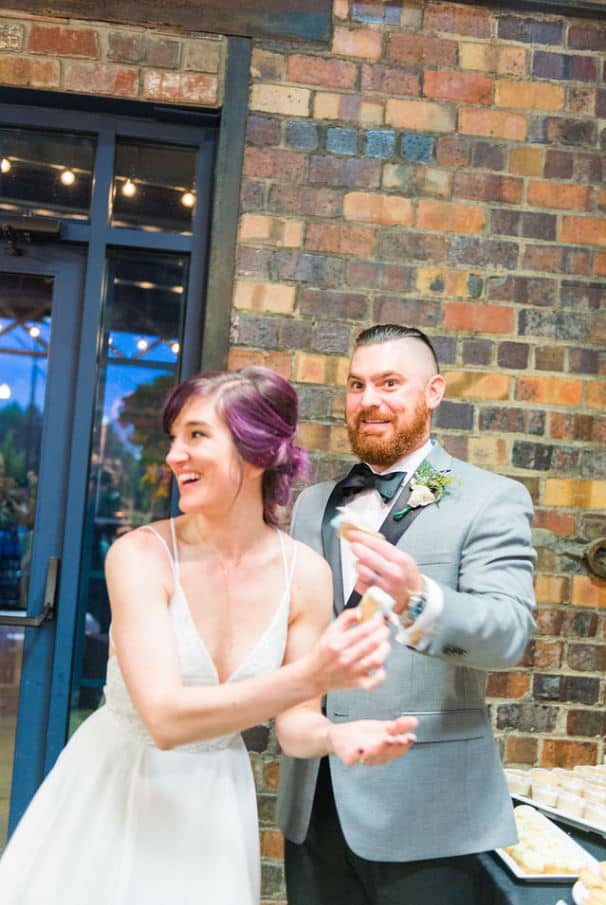 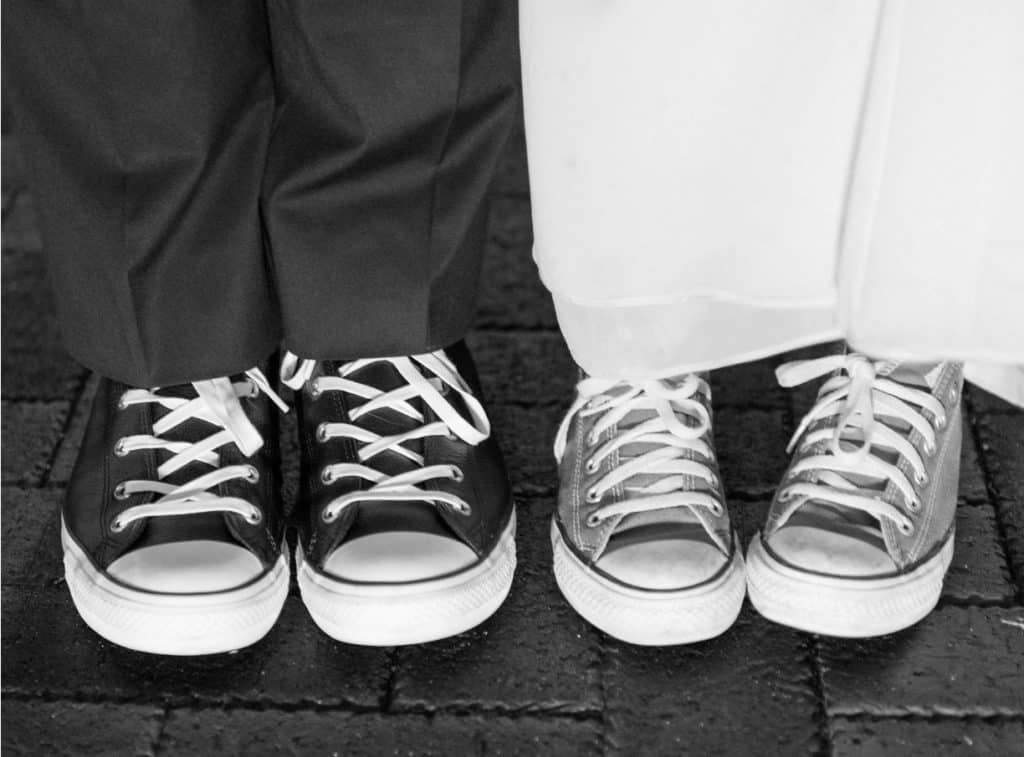 We really made sure our guests were entertained because in addition to the usual DJ, we had the mobile zoo, popsicles, a caricature artist, and polaroid cameras just in case people got bored waiting in line for any of the aforementioned activities. But of course there was plenty of dancing. Even my 100 year old grandmother was seen on the dance floor so no one had an excuse not to dance!

In the end was our day perfect? No, but every wedding is bound to have a hiccough or two so we knew there would be things that would go wrong and made the best of it. Did we enjoy every minute of it? Yes and we would do it again if we could (except for the planning part, phew), mostly just so we could spend more time with our guests as we felt like we talked to no one. But everyone said they had a blast and that’s all we can ask for! 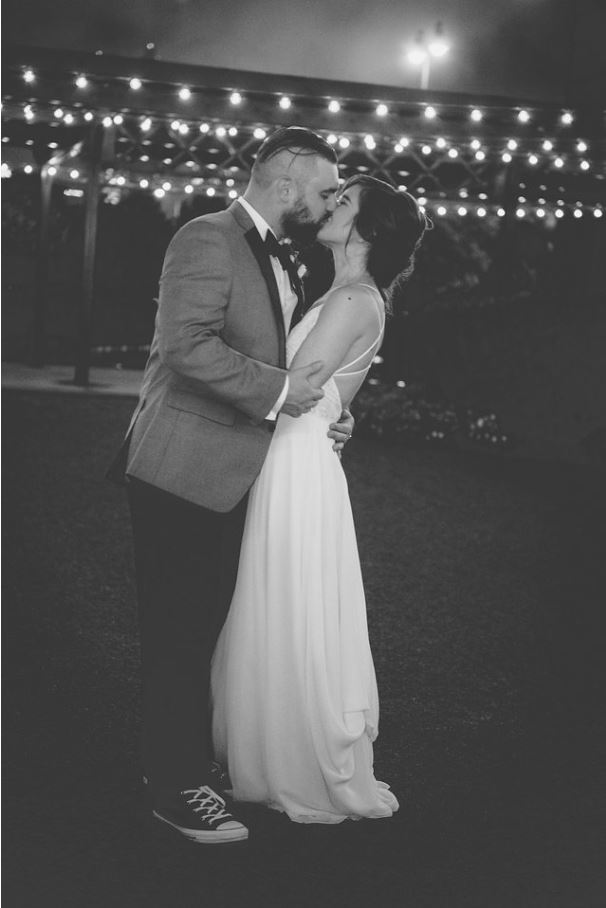 Appetizers & Dinner – The Venue at Dock580

Seriously. And I’ve obviously been to quite a few. I love all the details that are so personal (and cute/fun/pretty!), the mobile zoo(!), the foooood, your guys’ pictures, I just love all of it! I know how stressful the weather can be but it seems like such a perfect day!

Aww thank you so much! Definitely a lot of stress but happy with how it turned out despite the rain.

Omg the baby cheetahs I dieee. The photos are beautiful!!

WOW!!! Your whole wedding as shown in these photos gives me goose bumps. Love that you had the mobile zoo, though I wish you would have gotten a photo with the sloth and posted it (they are some of my favorite critters). Also LOVE your choice of shoes. That takes me back to high school (class of 1962) where the guys in the band always wore white tennis shoes with red socks along with their suits at concert time. You and Bob definitely did your wedding right.

Thanks so much Susan! We also wish we had gotten a photo with the sloth because even our photographer missed it for just having a photo of it in general – so much going on! But guests surely got photos. We still need to gather them all.

If any of your guests did get a photo of the sloth, I hope you’ll share. Just because.

Thanks for the link. Unfortunately it is a private account.

LOVE these pictures! LOVE your hair! LOVE you and Bob!

That cookie table is pretty impressive. Did you have a favorite dessert of the evening?

I don’t think I could possibly decide, hence why we had so many options. And that’s just what we narrowed it down to!