With two fantastic giveaways going on right now, I’ve really been enjoying the comments in response to both prompts. The comments in response to my blogiversary have been particularly awesome as I am learning more about all of you, especially those coming out of the woodwork who do not normally post. It’s nice to know you’re out there and are enjoying what I am dishing out to you.

I also want to come over for Thanksgiving dinner after hearing all the recipes you would make with the CW bakeware by CorningWare. In fact may have to track some of you down for those recipes. But first I will hold up my end of the deal and start sharing the recipes I made for Friendsgiving starting with the stuffing.

The combinations of salty bread, sweet apples, caramelized onions, balsamic vinegar, and the savory elements of sage made for an exceptional stuffing to serve with Thanksgiving turkey. It is baked in a separate dish from the turkey and can either be baked covered to retain it’s softness or uncover it at the end and cook a little longer for a crispy top. Whatever you preference, I’ve got you covered. Or uncovered ;-). 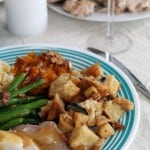 This is such a creative stuffing! Love and pinned!

Mmm such a great idea to slightly tweak tradition !!

I think 2022 is going to go down as the year I refreshed the most recipes. Here's the latest: gluten free AND vegan chocolate almond cupcakes with raspberry almond butter frosting.


Find the recipe by clicking on the link in my bio.