Happy Father’s Day! Today’s event is being hosted by Kim of Cravings of a Lunatic and Jen of Juanita’s Cocina. They teamed up with their blogger friends to help raise awareness and support for Cancer and Hospice today in memory of Kim’s dad. We encourage everyone to read the posts and share their own experiences with cancer. We also would like to encourage everyone to donate to the Canadian Cancer Society, the American Cancer Society and also to the Canadian Hospice Palliative Care Association. Hospice was a key element during Kim’s father’s battle with cancer. They made it possible for Kim to care for him at home. So please show your support and donate if you can. You can also contact your local Hospice and donate directly to them if you wish. A little goes a long way!

Be sure to check out everyone else’s posts today:

S’Mores Brownies in Jars by That Skinny Chick Can Bake

Dark Chocolate and Orange Muffins by The Dutch Baker’s Daughter

My Fathers Day Recipe Round Up by Curry and Comfort

Sauteed Strawberry and Sugarsnap Salad by Cook The Story 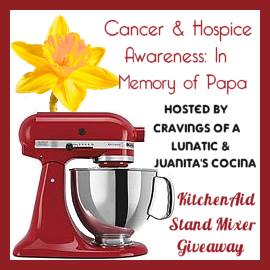 As for me, I have been lucky enough to not have too many people in my family suffer from cancer, or myself (yet). Skin cancer seems to run in my family, but it is uncertain if it is a genetic predisposition or just lack of sunblock when they were younger. My father has had a few spots removed and so far nothing too serious has popped up. My uncle had prostate cancer but it was taken out. My step father was also diagnosed with prostate cancer not too long ago, and the treatment is going very well. However, I have lost a couple to cancer. My grandmother’s sister (my grand-aunt?) died of colon cancer and a couple years ago my step grandmother died from pancreatic cancer just shortly after being diagnosed. Many family members stayed with her and my step grandfather at their home throughout the battle and end, and today’s post is in honor of them and all my other family members who have either fought their own battle or helped someone else through theirs.

Since it is father’s day I am sending some extra love to my father, who is the pancake king in my life. Growing up it’s wasn’t just a question of whether we wanted pancakes, eggs, or waffles for breakfast, but what KIND? Pumpkin, applesauce, buttermilk, and oatmeal were the most popular but every now and then something new would appear on our plates. So today I am making pancakes for my dad. Well, digital pancakes since he is 6 hours away from me, but nonetheless I think he would enjoy these pancakes because of the fruit topping. And since it is also Single Serving Sunday these serve one, so whip up a batch for the dad in your life. 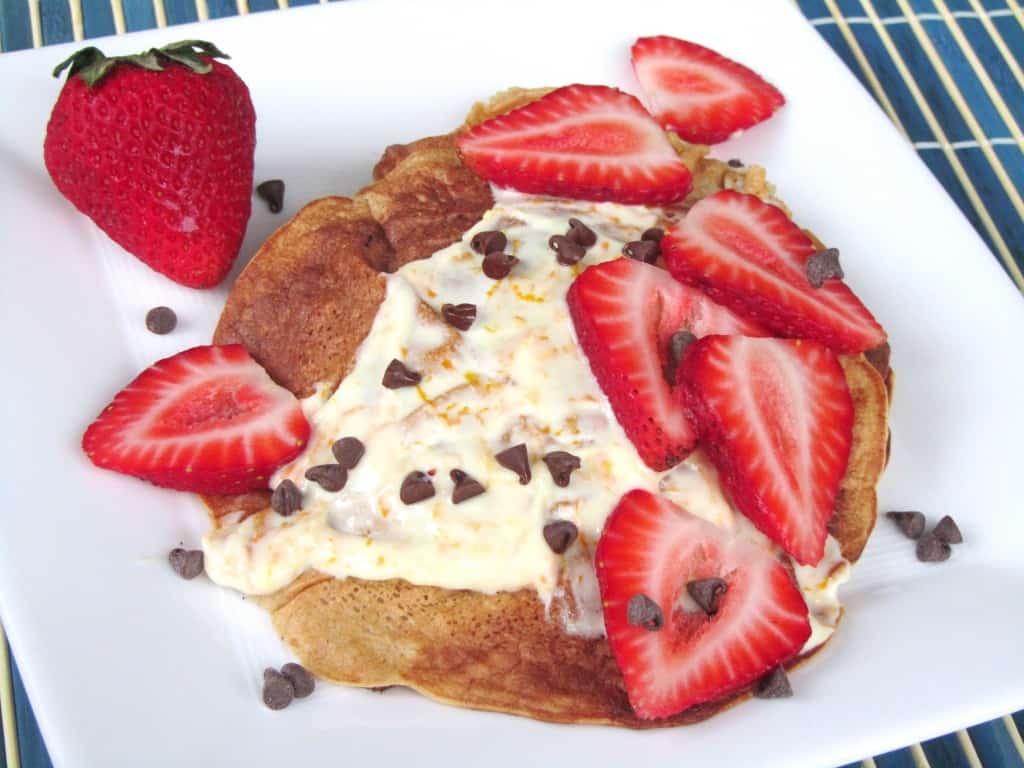 Source: Adapted slightly from SELF.

Enter for your chance to Win an Artisan® Series KitchenAid®  Stand Mixer in the color of your choice (there are 26 to choose from) as well as an Ice Cream Maker Attachment. A sweet choice for all,  this creative attachment features the largest ice cream bowl capacity in the industry. Prepare 2 quarts of ice cream, sorbet, gelato or other frozen desserts. We’re pleased to announce the giveaway is open to Canadian residents, as well as U.S. Residents. Winner will be chosen and announced during the pinchatlive event, described below. Winner will also be notified via email and has 48 hours to respond. If winner does not respond another winner will be chosen. 1 Stand Mixer and 1 Ice Cream Attachment are being given away as a group, not 1 per blog just to be clear for our readers.
There are bonus prizes for the pinchatlive event. We are giving away 1 Vanilla Infused Gift Box Set, 1 Lemon Infused Gift Box Set and a $30 Amazon Gift Card.  In order to participate in this event follow the Pinterest Board #recipesfromtheheart. Hop on the Pinterest board on June 22 at 2 pm EST to follow along. We’ll ask questions and those who comment are entered to win the bonus prizes. There will be a G+ Hangout on Air during the event as well. Winners of the pinchatlive event must be Canadian or U.S. residents.

Visit Facebook.com/KitchenAidCanada and click on the “More than a Mixer” tab to explore all 12 attachments available for the KitchenAid® Stand Mixer.

These are pancakes my dad would love too! Thank you so much for joining us for this post!

This is a great post! I’ve had several people in my family affected by cancer. My grandmother died of cancer, my grandfather survived cancer, and my mother had breast cancer when she was very young, and also survived. My sister’s and I are all at a higher risk for breast cancer because of what happened to our mom, but so far, we are all fine! Praise Jesus! And these pancakes look A-ma-zing!!

Erin thank you so much for joining us and for sharing so much of your life with us today. I thank you from the bottom of my heart. This recipe is perfect for this event. I’d love to try this one. It would go over really well here. I’m a sucker for cinnamon and chocolate chips.

My husband is the pancake king. I hope my kids remember him that way. He always makes pancakes when we have a day-off and a morning with nowhere to go.

Oh how I love chocolate and cinnamon together. These pancakes sound amazing!

I’m very happy to see all these awareness posts on my blog feed today. What a wonderful idea. The pancakes look very delicious too.

I would make cupcakes!

Cancer seems to touch most of our lives in some form… sorry to hear about the skin and pancreatic cancer in your family. Thank you for sharing these beautiful and delicious looking pancakes with us. I would eat these for breakfast, lunch or dinner. :)

Pancakes remind me of my dad, too…his favorite were blueberry! Yours sound amazing, Erin. I’m so glad we all joined forces to increase awareness of cancer…and hope more cures can be found in our lifetime.

Cancer is so sad and touches so many people’s lives :(

I adore these cinnamon chocolate chip pancakes though, I would love to have these for breakfast!

Oh my goodness, those look yummy! And I would love to have a stand mixer of my own. :)

Yumilicious pancake with cinnamon and choco chips!! Love the idea and your dad is so lucky to get those served.

These pancakes sound so good. Love the idea of adding cinnamon with chocolate chips.

I would make some mint chip ice cream!

My favorite kind of cake is short.


Fruit desserts have always been my favorite, and in the summer I think of shortcake more than pie. So when I was looking at 25 pounds of peaches I knew what I had to do.

I am not normally into trendy slang, I cringe at "za", but "bloobs" snuck into my vocabulary. Much to my husband's dismay he too has adopted it ::evil laugh::


These muffins however are not so evil, with bloobs, ricotta, cardamom, whole wheat flour, and honey 🍯.


Get the recipe linked in my bio.