I was provided with complimentary admission, parking, and food vouchers. However, all thoughts and opinions remain my own.

You’ll never run out of games, thrilling rides, exhibits, and fried food to eat at the Ohio State Fair. 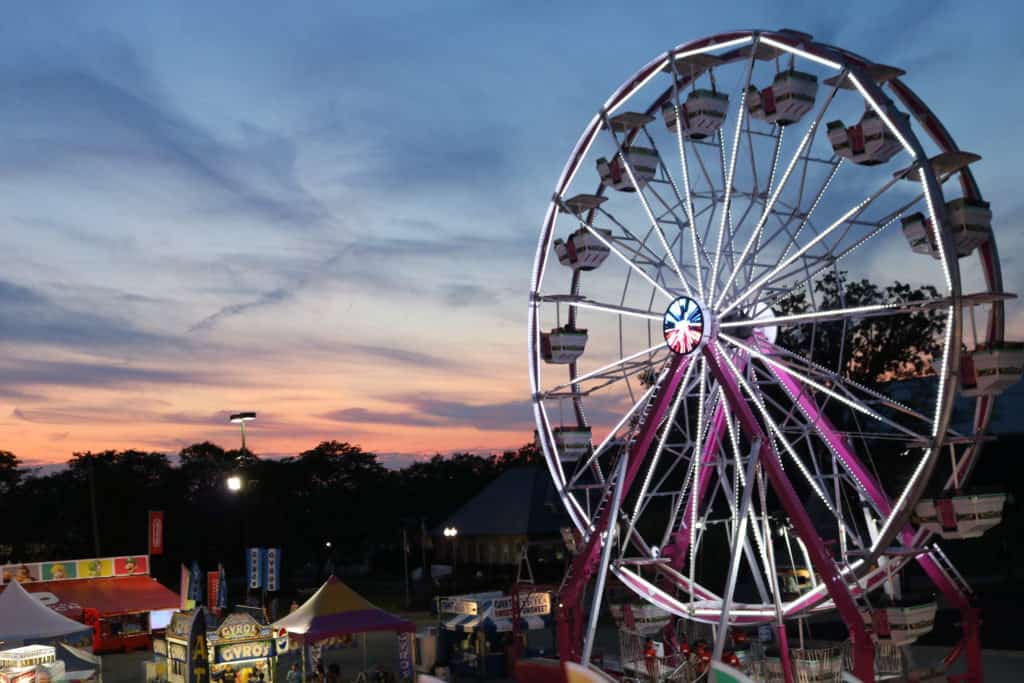 The 2019 Ohio State Fair started this past Wednesday and I’ve already gone twice! There’s so much to see and do every year, both new and old that I missed from previous years, so it’s never a bore. Speaking of new things, my first visit was primarily focused on all the new fried foods available this year because it’s the state fair and there’s no limit to what they will deep fry. 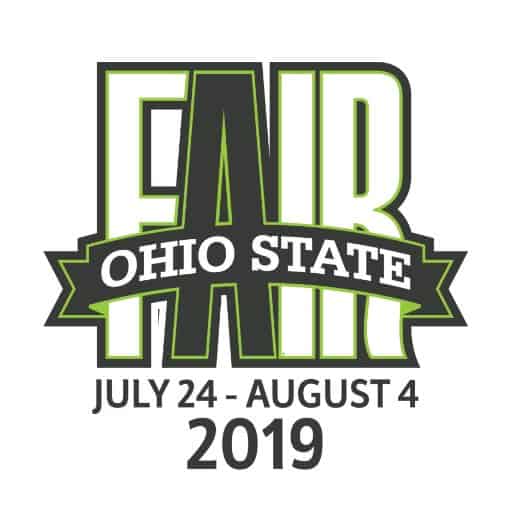 The first item I sampled was the deep-fried mini gummy burger. You know those little gummies that look like a burger? Well dip them in batter and fry them. At first I worried it would be a gelatinous mass in the center but I was pleasantly surprised that it was gooey and reminded me of a jelly filled doughnut. And if you’re into food pairings, it went well with the Fretboard Reba strawberry blonde ale. 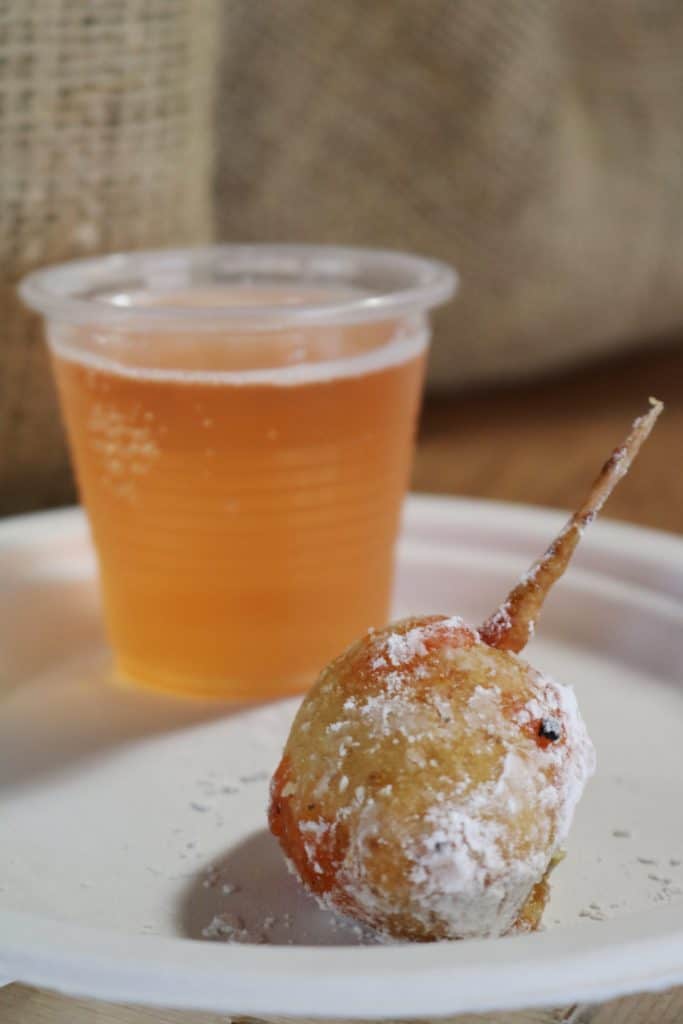 Next up were the pork butt tots. What’s not to love about crispy tater tots topped with delicious pork butt? Nothing unusual here, just plain deliciousness (paired with Debonne Unoaked Chardonnay). 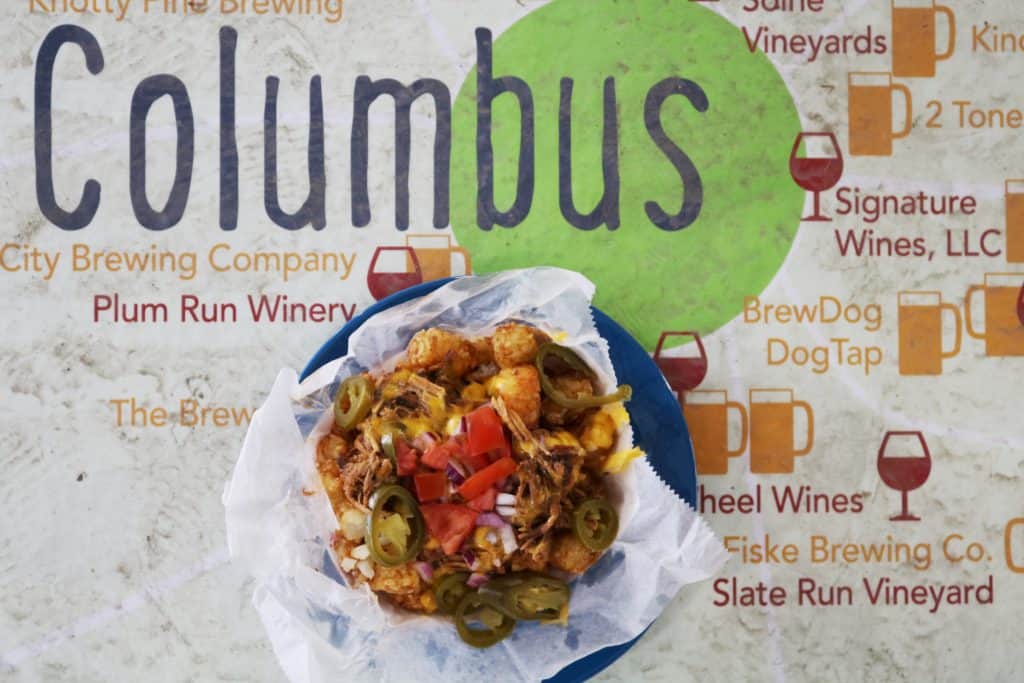 The most unique new food award goes to the maple sriracha bacon mini doughnuts. I admit that I don’t think I could eat a whole order by myself but they are worth a try. And the kick from the sriracha went well with the Ferrante Grand Rivers Valley Gerwurtraminer. 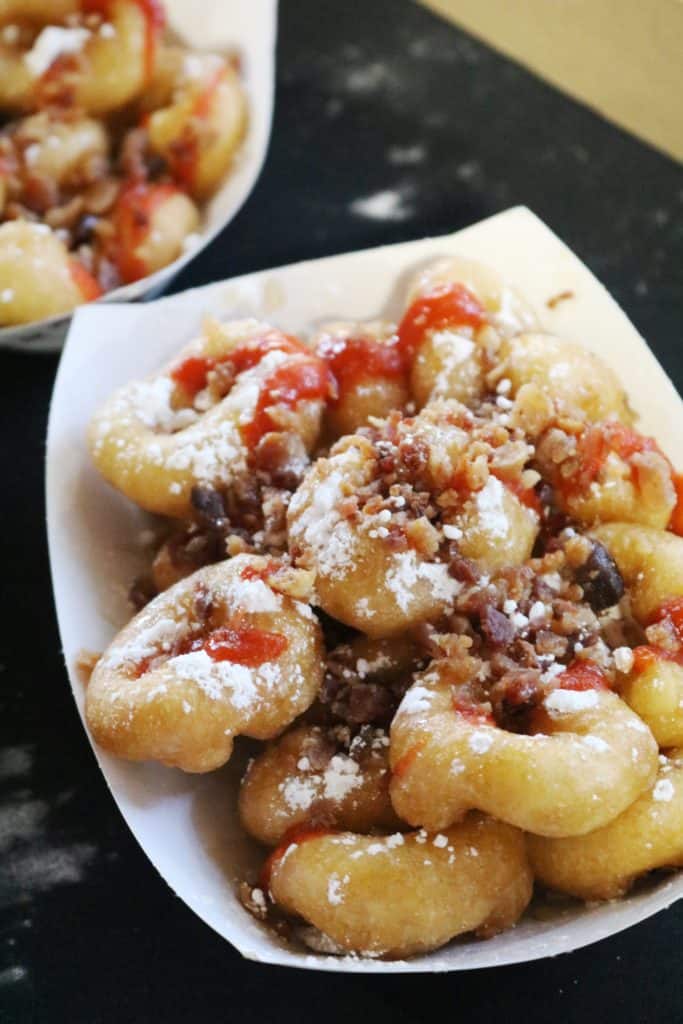 I was most excited for the flamin’ hot cheeto corn dog! I have been known to coat things in cheetos and this is one I had not tried yet. While I didn’t think it was particularly spicy, I still enjoyed the hint of cheeto in the batter. This hot-dog was paired with The Vineyards at Pine Lake Vineyards white wine. Side note: did you know 98,370 corn dogs were sold during the 2018 fair? 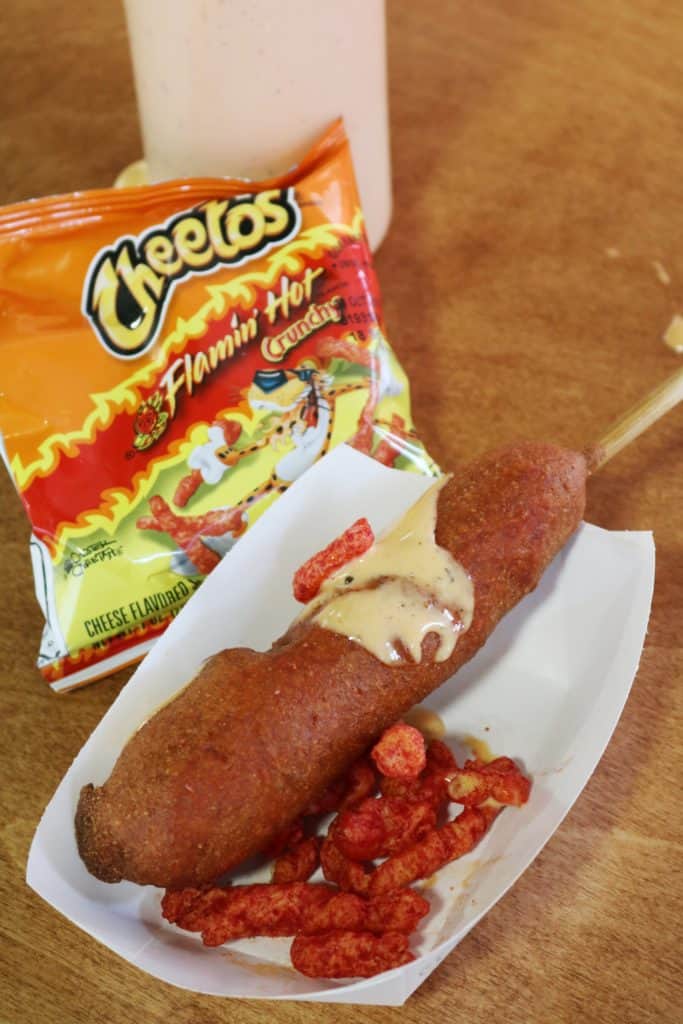 Are you a funnel cake person or a fried dough/elephant ear person? I grew up with fried dough but either way they are both fair food staples. And this year you can get flavored funnel cakes! I tried the mint grasshopper and caramel maple bacon. I’m not the biggest fan of mint grasshopper in general but I heard from people who are that they loved the funnel cake. Obviously I was more partial to the caramel maple bacon and especially loved the Madtree Shade blackberry tart ale that was paired with it. Probably my favorite combo of the day. 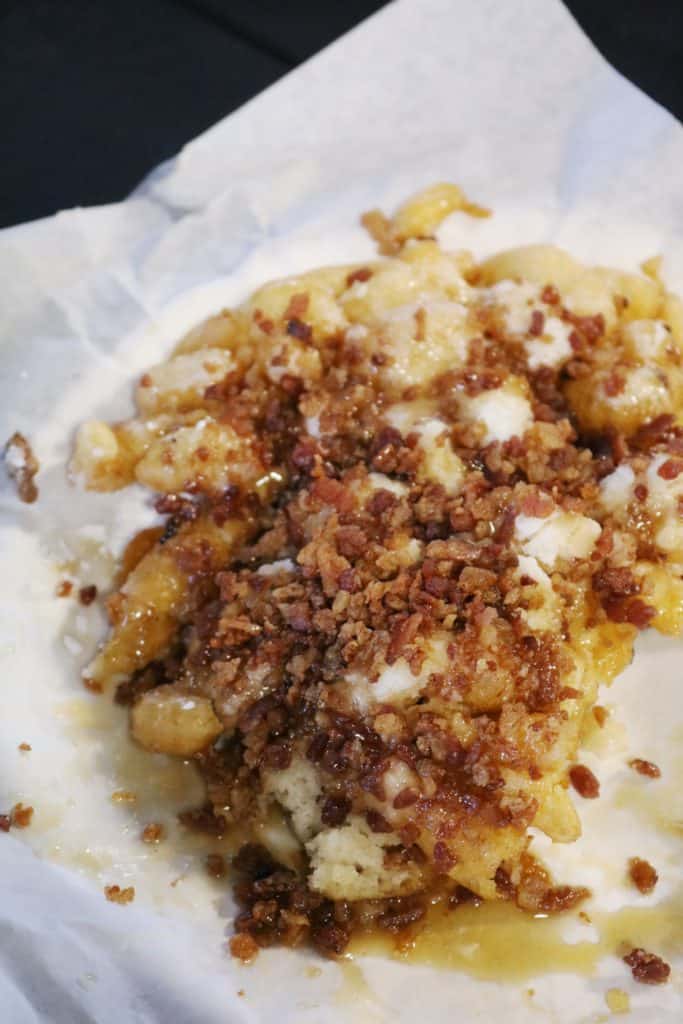 Previously I shared one of my favorite items – the fried buckeyes. But this year they stepped it up a notch further by wrapping them in bacon first! I have to say I might like this version better than the original. The crispy salty exterior is the perfect contrast to the sweet creamy peanut butter center. I would say these need to be around more than just for the fair, but it might be best for my waistline to keep it the way it is. 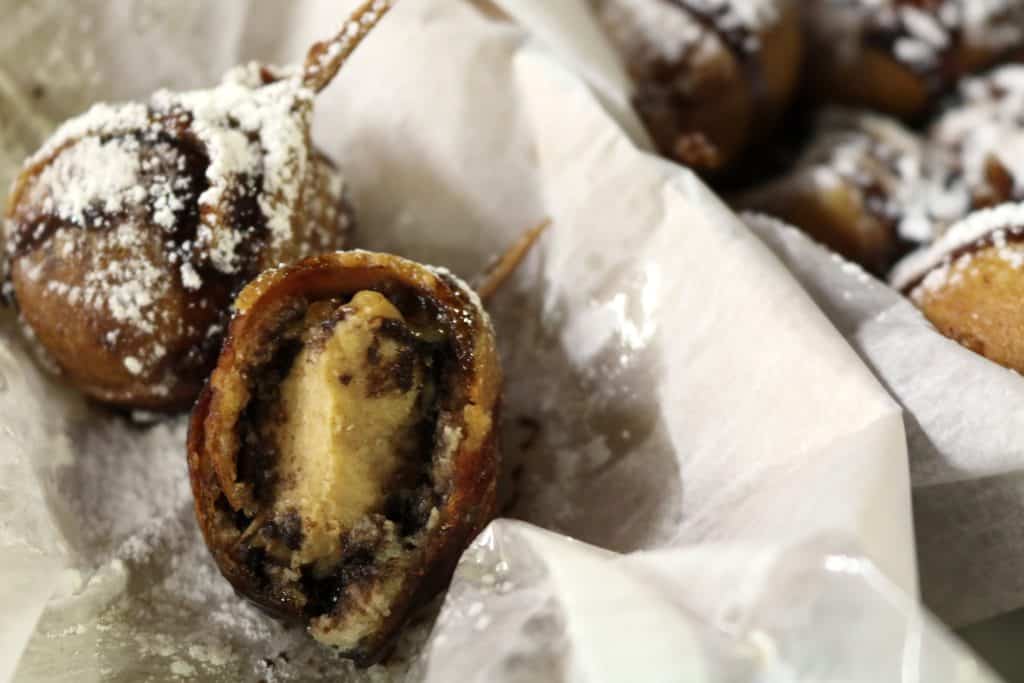 After stuffing myself with all the new food, I managed to still have room to grab some of my favorite stand-by items as well while checking out the rest of the fair. Heck I love the pork loin sandwich and pulled pork so much that they actually hired me to take photos for them in previous years and they are in fact on display! I was super giddy to see that the quality held up when blown up to poster size. 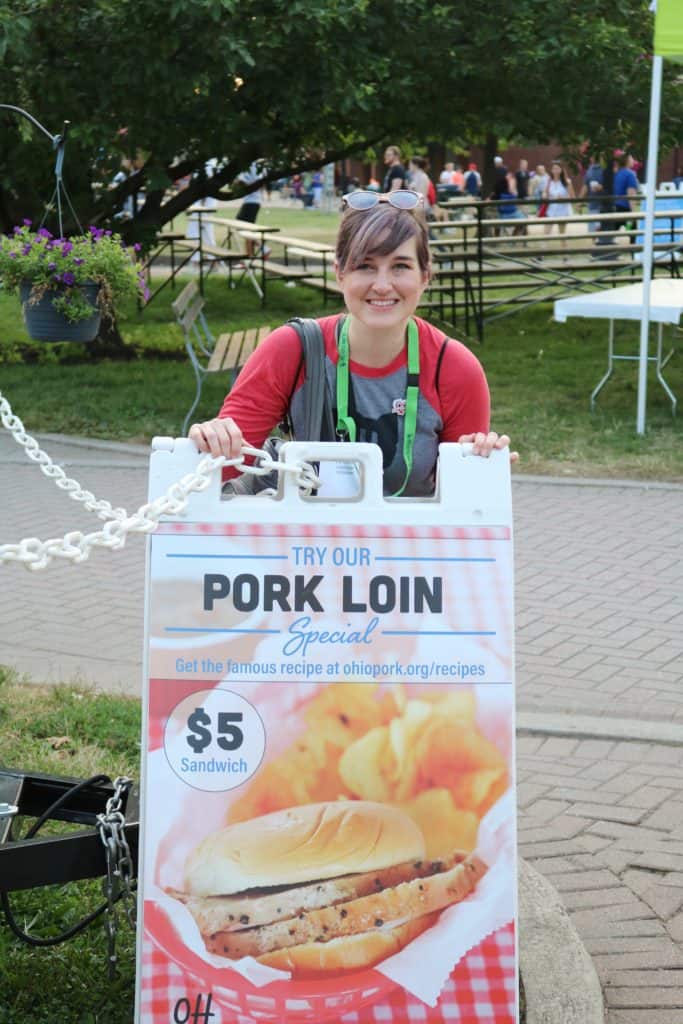 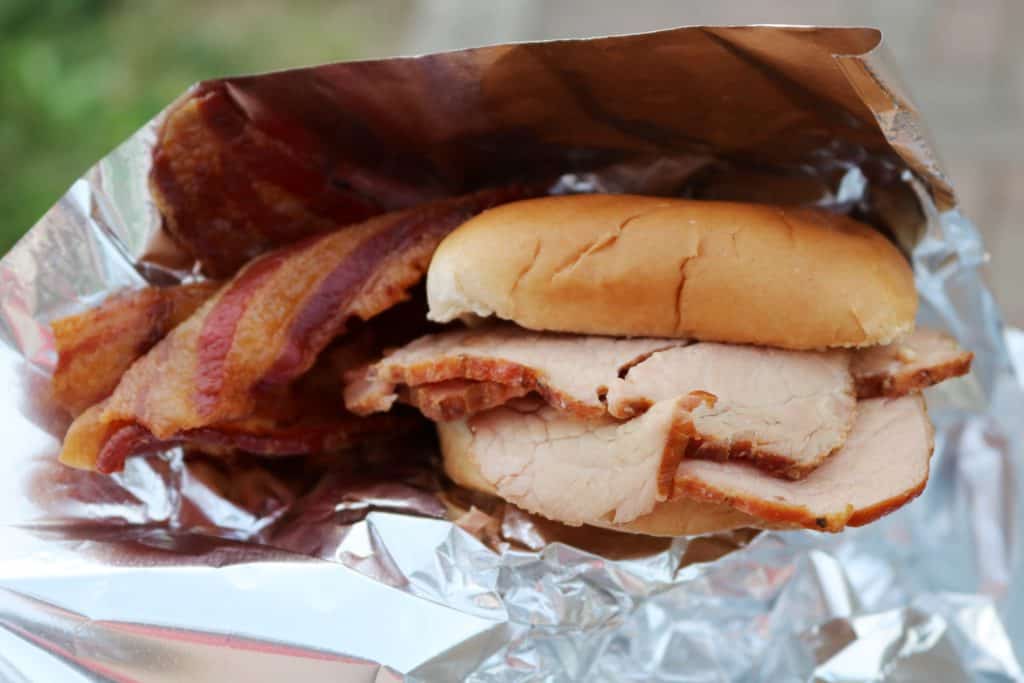 There’s so much great art, beautiful animals, rides, and information to absorb that there really is something for everyone at the fair. Other than the food, I stuck to the animals and exhibits this year. I met several farmers and talked about how much love and effort goes into taking care of their animals, saw day old piglets and calves actually born on the fairgrounds, and learned about soybean farming and how it not only benefits other farming industries, but its by-products can be used as a greener alternative to petroleum (such as foam padding, lotion, antibacterial gel, etc). 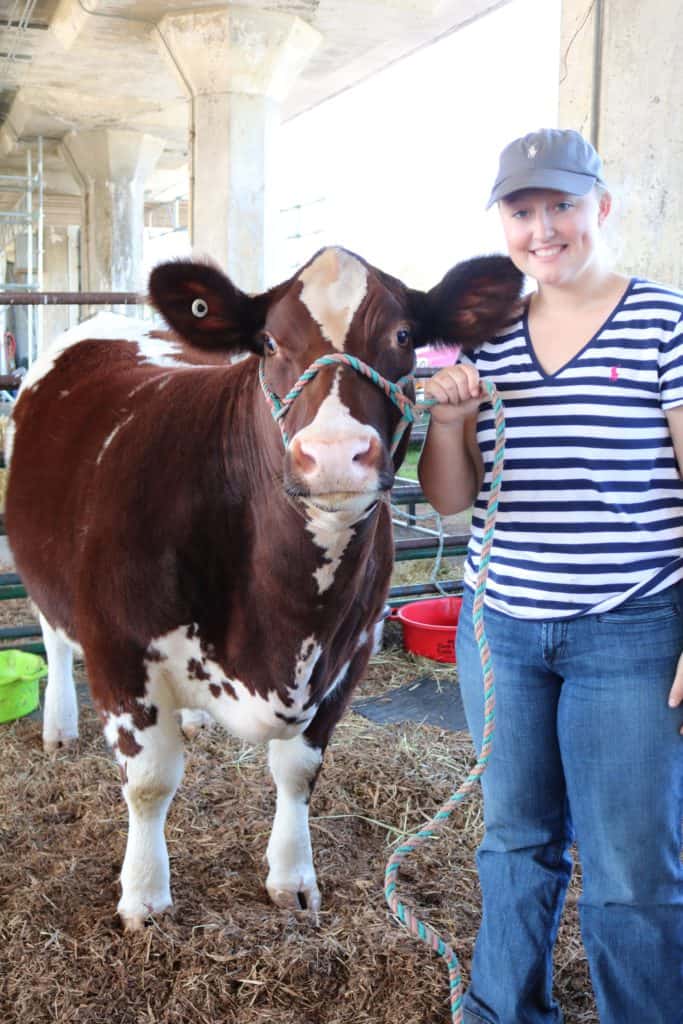 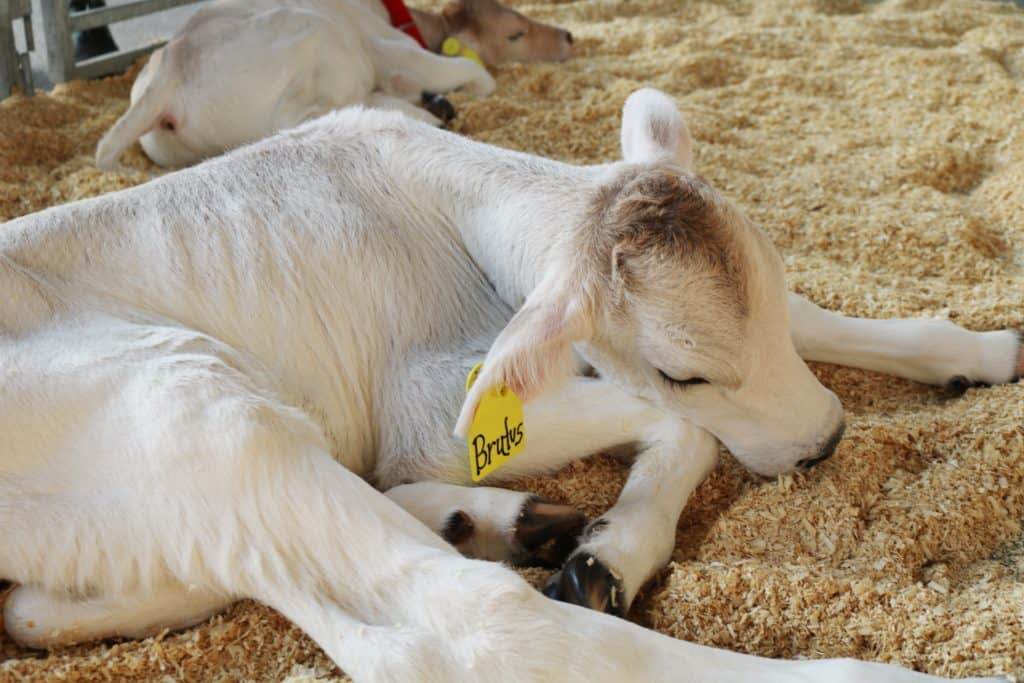 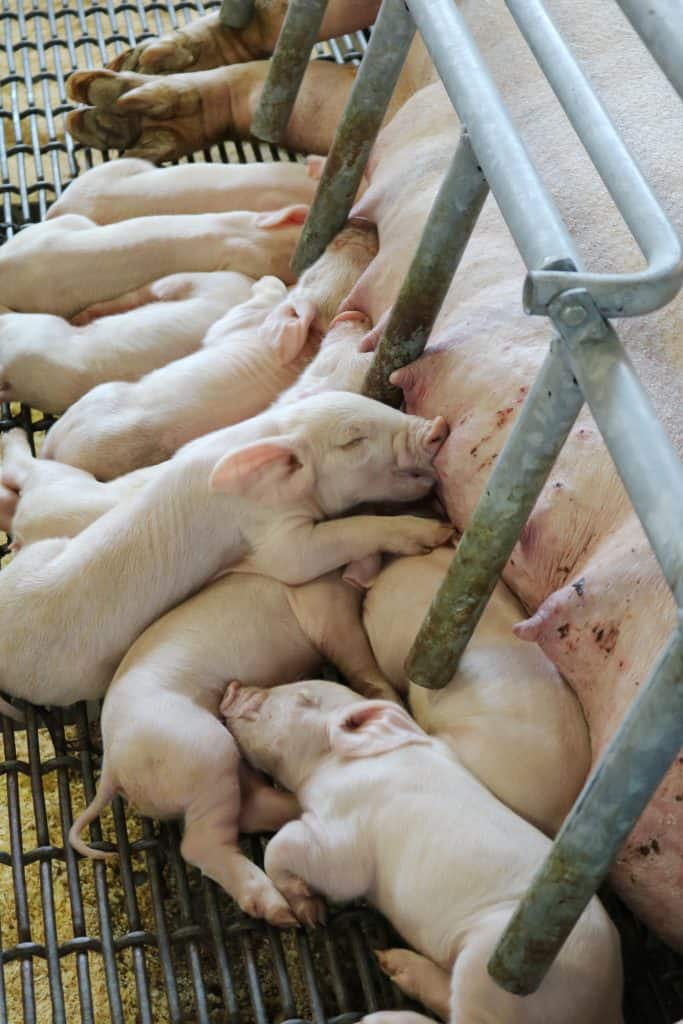 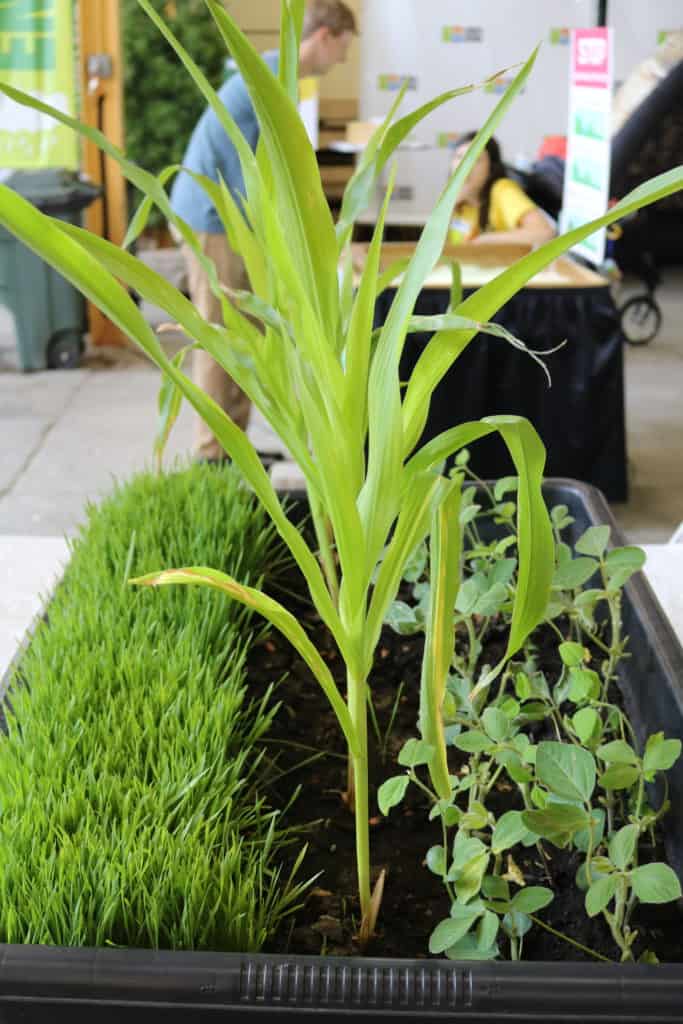 I did go on one ride, the skylift, because I never had before! I’ve gone skiing so it wasn’t exactly novel but riding one while warm out was! And of course checked out the butter cow and new 2019 butter sculptures honoring the NASA Apollo 11 astronauts. What is on your list to do at the fair this year? If you want to know more about what is offered at the fair you can check my post from 2016! 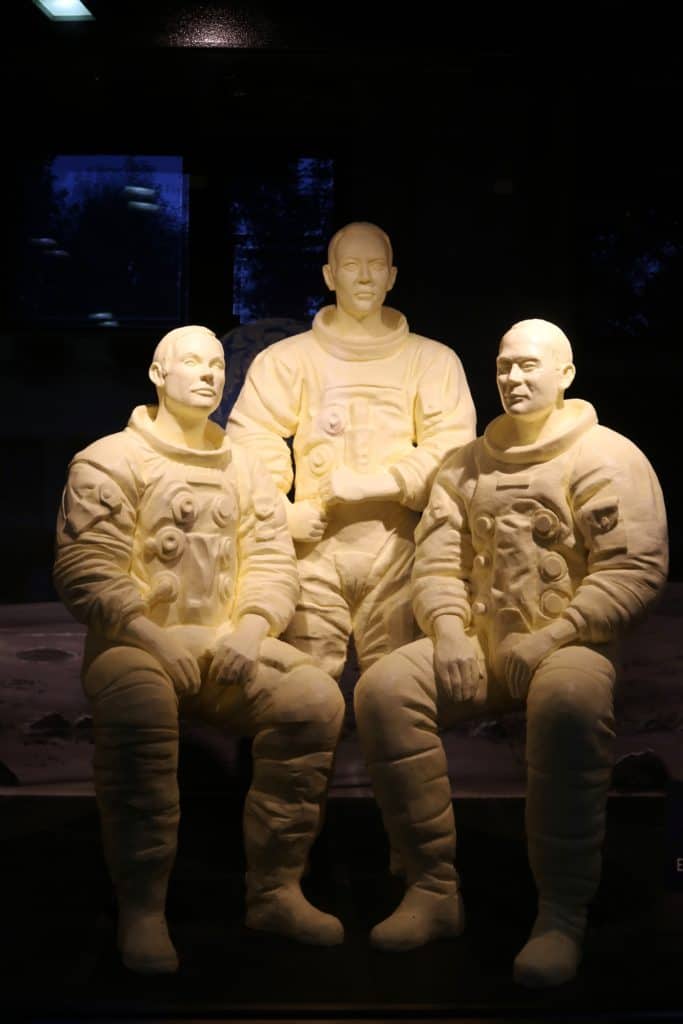 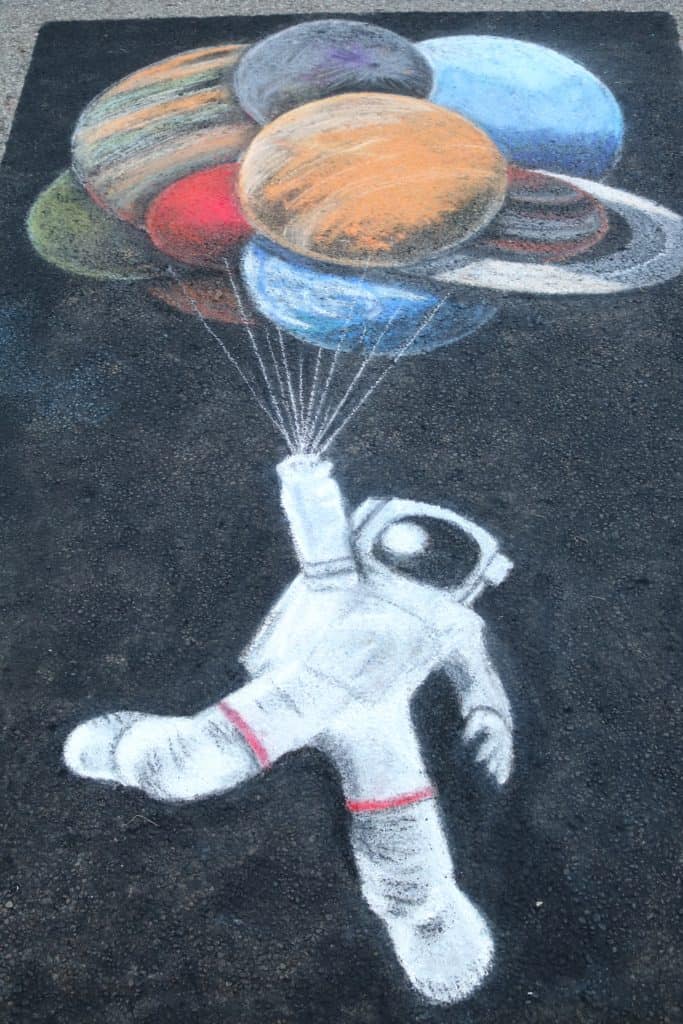 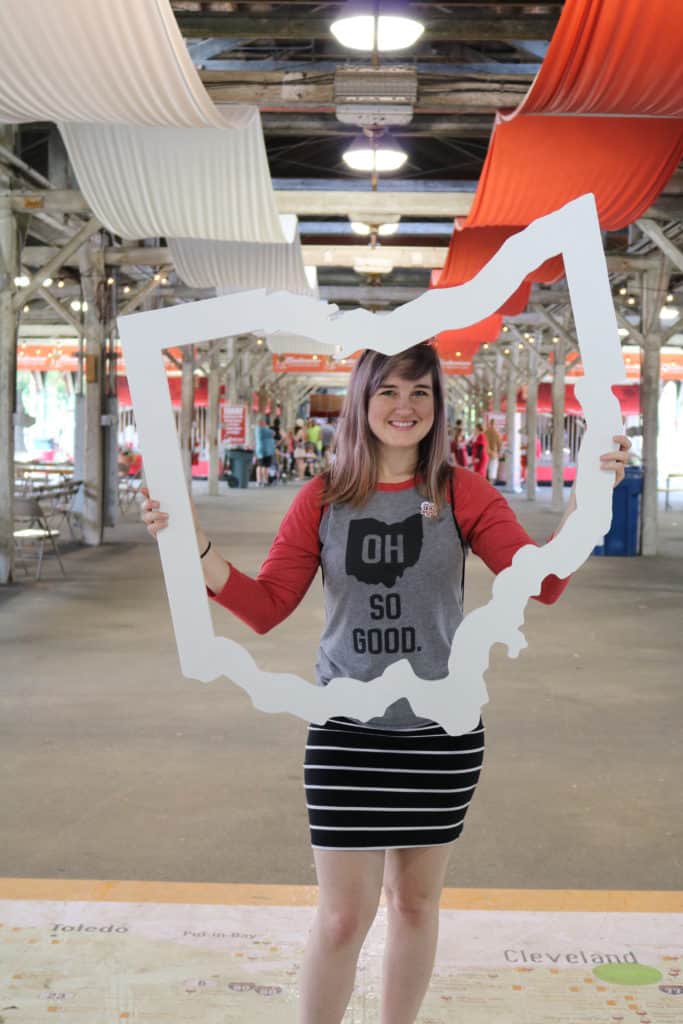 […] their no-frills cheese coney made me think of the Ohio Sate Fair, which made me sad that it’s closed to the public this […]

Ahhhh if I was child-less I totally would’ve gone down. Maybe someday–those fried buckeyes are calling my name!

I’m sure he would love to go with you someday ;-)

Reading this post made me miss going to the Los Angeles county fair, which I did for years, including entering quilts and jams. (I did win prizes for my entries.) My very favorite fair food was gyro sandwiches. We actually the saw the butter sculptures this afternoon on the AM Joy program (MSNBC). They are amazing! It’s neat that you got to see them in person.

Oh I love gyros! And that’s really cool that the butter sculptures were featured outside out Ohio.

Who are you calling chicken (salad)?


Originally planned 3 recipes for #CranberryWeek but I've been traveling so much for work it's a miracle I participated at all. So while I'm tapping out after today, stay tuned for more from other bloggers the rest of the week!