I was invited to dine at Hofbrauhaus Columbus and compensated for this post. All thoughts and opinions are my own.

A little piece of Munich, Germany resides right here in Columbus, Ohio. You might not be able to ask for more than bier cheese, pretzels, and beer, but they offer lots more! 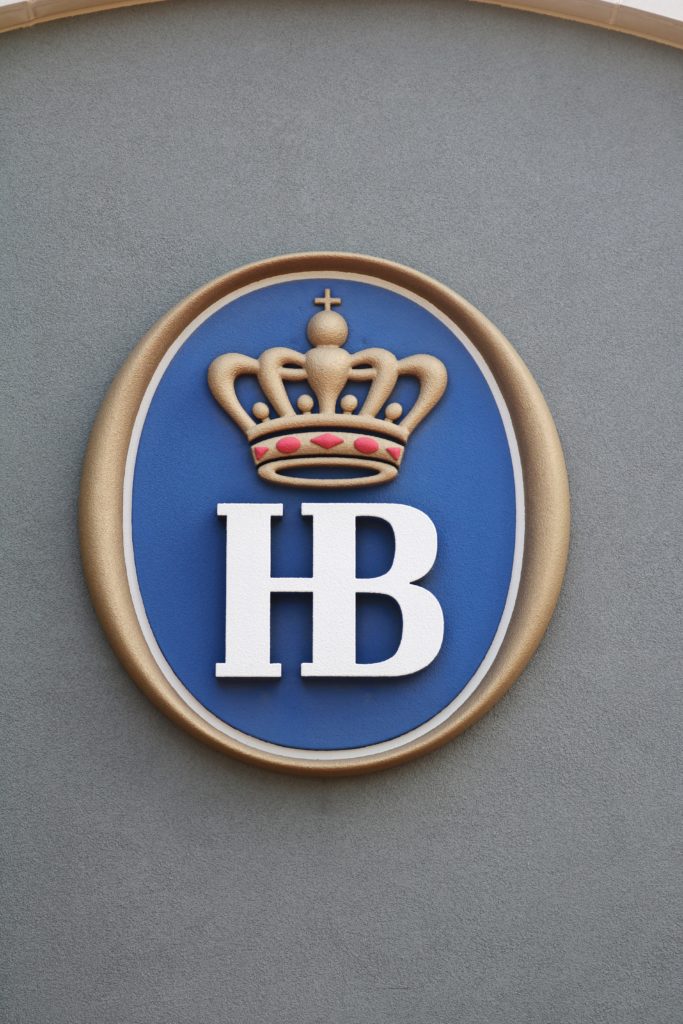 I’ve been to three locations of Hofbrauhaus in my life thus far, the first being Cincinatti, OH (technically Newport, KY and oddly enough I was still living in Memphis, TN at the time), the second in Berlin, Germany, and most recently my current town of Columbus, OH. Did you know there are only 8 locations in the US and three (if you count Newport since it’s on the border) are in Ohio. Told you Ohio isn’t a flew-over state! But let’s stay on topic. 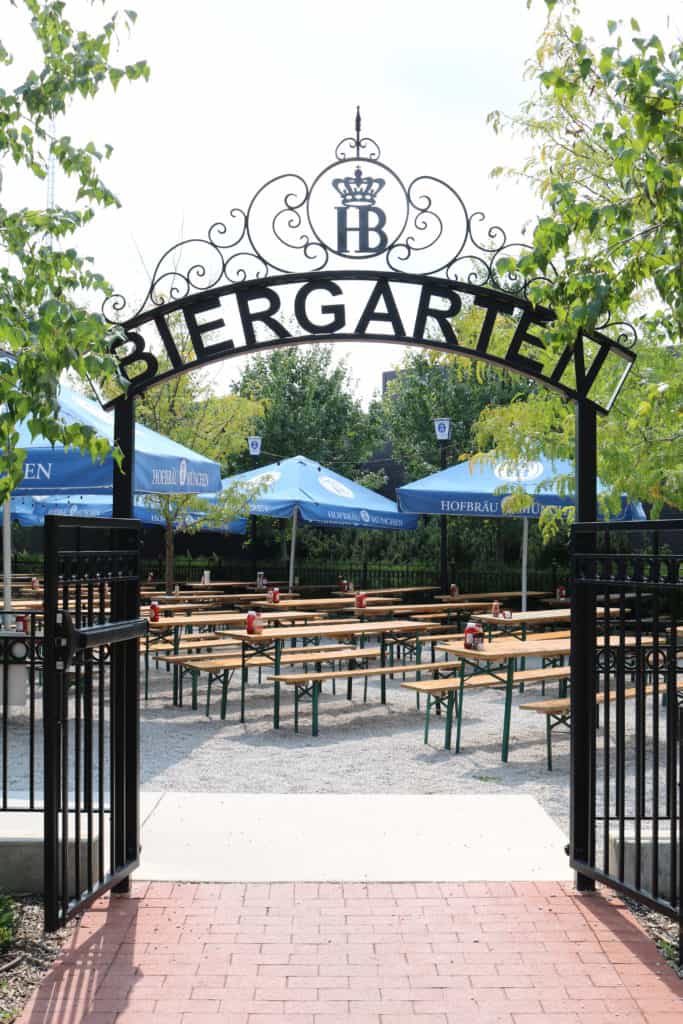 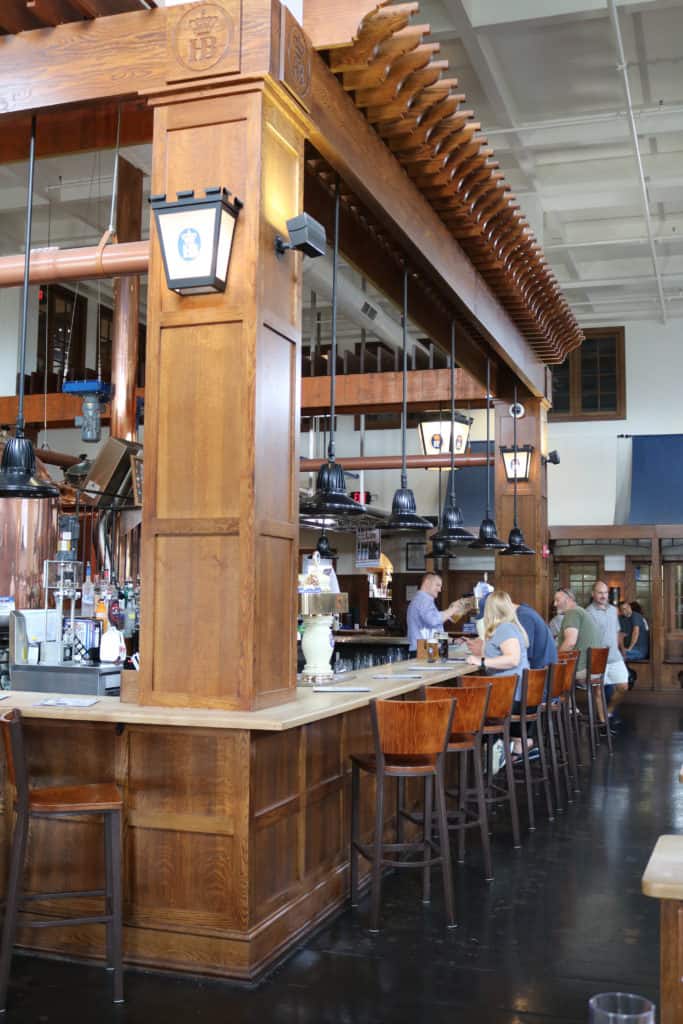 On my recent visit to Hofbrauhaus with some of my fellow CbusFoodBloggers, we ordered an array of items from what you’d expect to see on the menu like sausage and schnitzel, to things like salmon and salads. So just in case someone wants to go to Hofbrauhaus and someone else doesn’t want German food, there’s no excuse because they have other options! But in reality, can you really turn down pretzels and bier cheese? 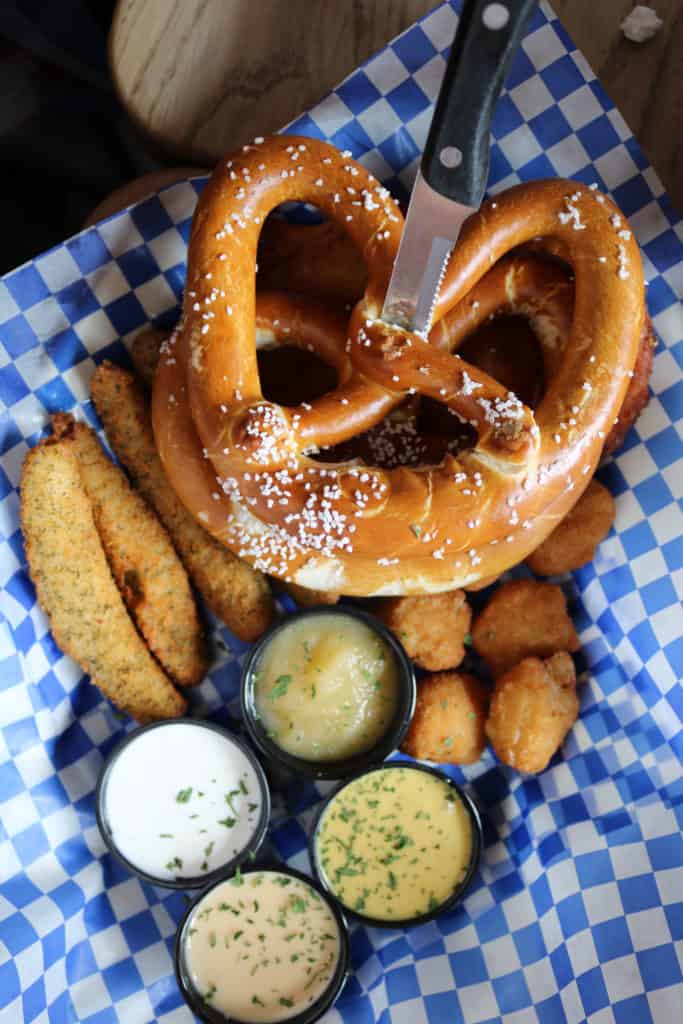 But seriously, to make sure we didn’t miss anything we started with the “yard” sampler consisting of fried pickles with Ranch, potato pancakes with applesauce, sauerkraut balls with honey mustard, and of course pretzels with bier cheese. We may have ordered some extra pretzels for good measure. 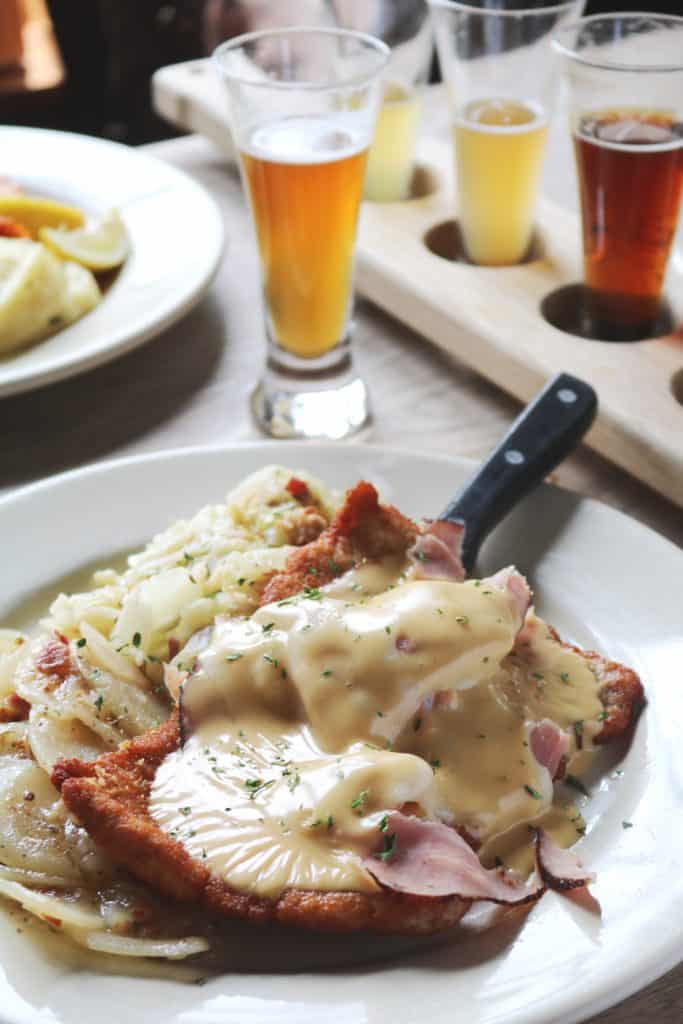 As per usual I had a hard time deciding what to order and thankfully Caroline sitting next to me was debating the same two menu items as I was so we ordered one of each and split them! Sure they are not drastically different, but that’s why it was that much more difficult to pick between the two! Yes they were both delicious, but my favorite discovery was bier cheese covered spaetzle – omg. But like I mentioned earlier, if you’re not feeling the heavy stuff, they also have a black and bleu steak salad that looked incredible as well as pan sear salmon topped with a Dunkel bourbon glaze. 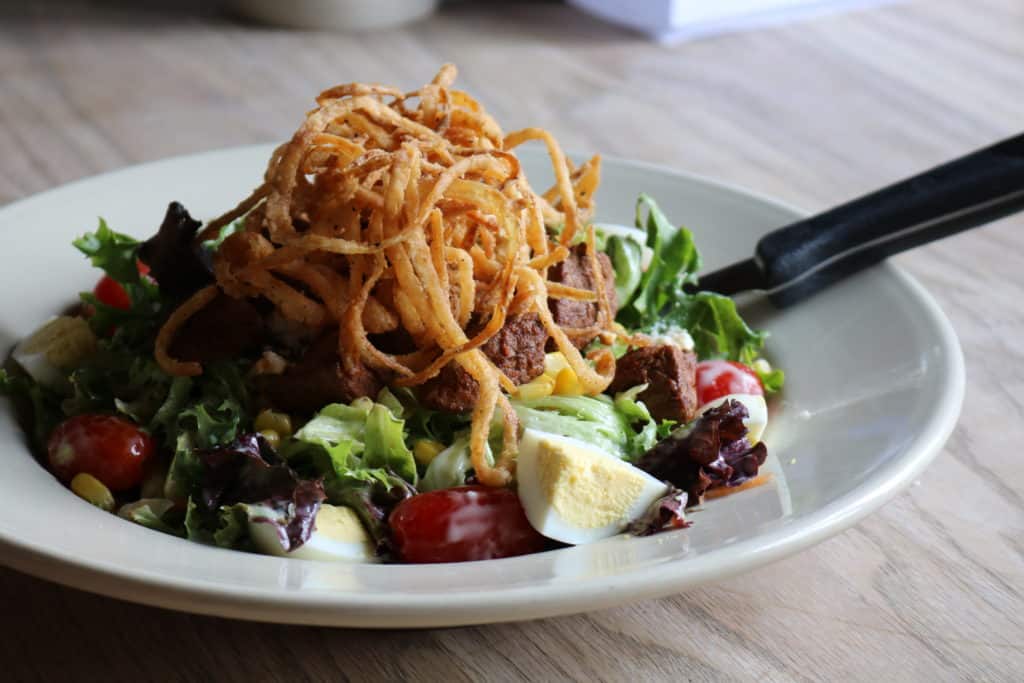 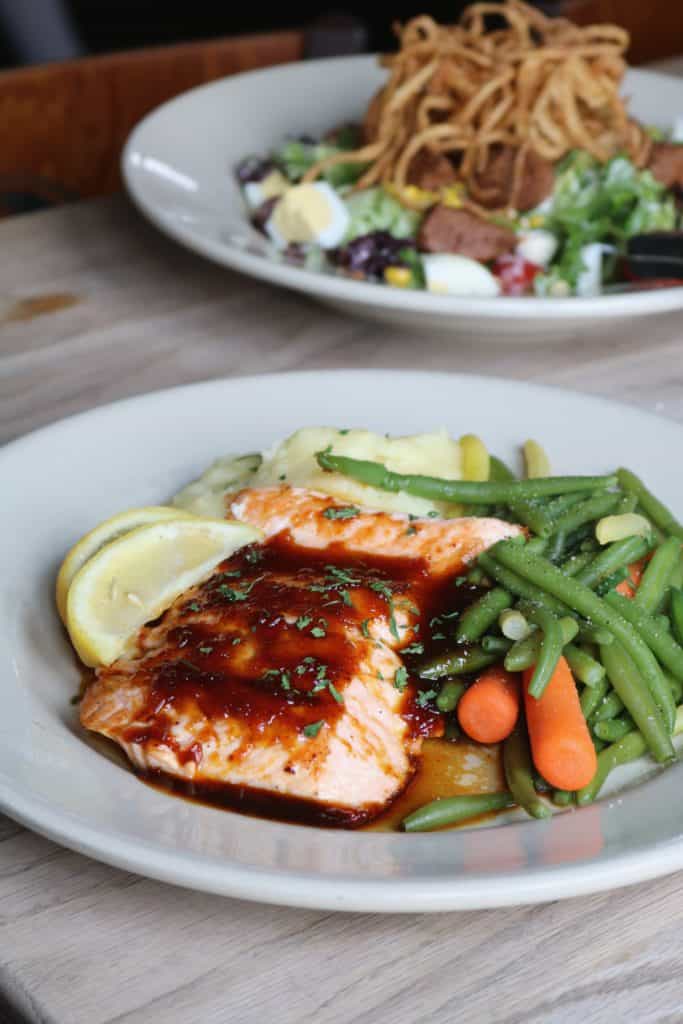 So yes all the food was splendidly delicious and total comfort food perfect for this time of year, especially since we seemed to have skipped fall and have gone straight into winter (requiring more comfort than usual). But of course in my world you can’t have a meal without dessert so we then ordered an array of their desserts offerings as well. This included an apfel strudel, cinnamon sugar pretzel, and a variety of cream puffs including strawberry, Boston cream, and chocolate. 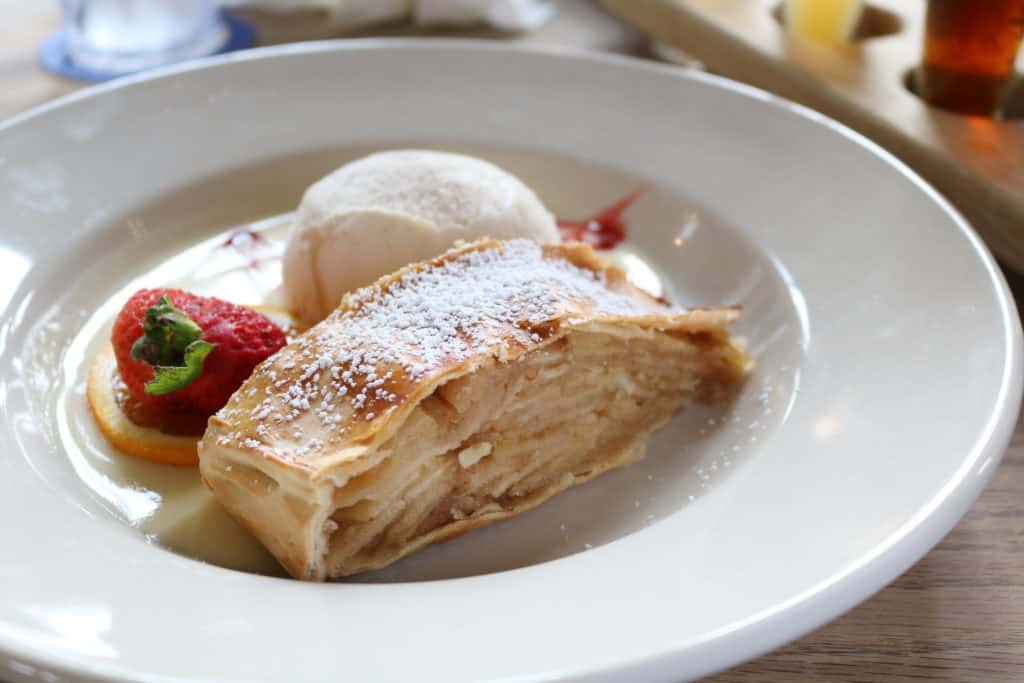 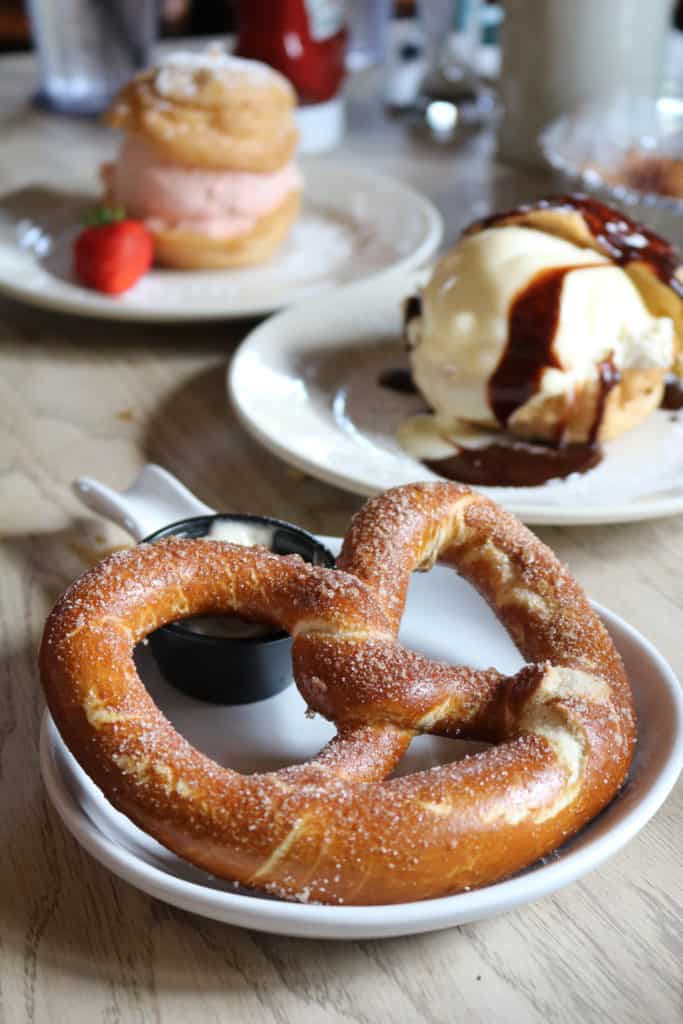 So I’ve talked a lot about the food thus far, but you might notice something is missing. Oh right the beer! Silly me. Yes we have Hofbrauhaus beer brewed locally right in Columbus, OH (and at the other 7 lucky spots in the US). And they make a lot of it! Here are some interesting facts that we learned while taking a quick tour of their facility located on site. 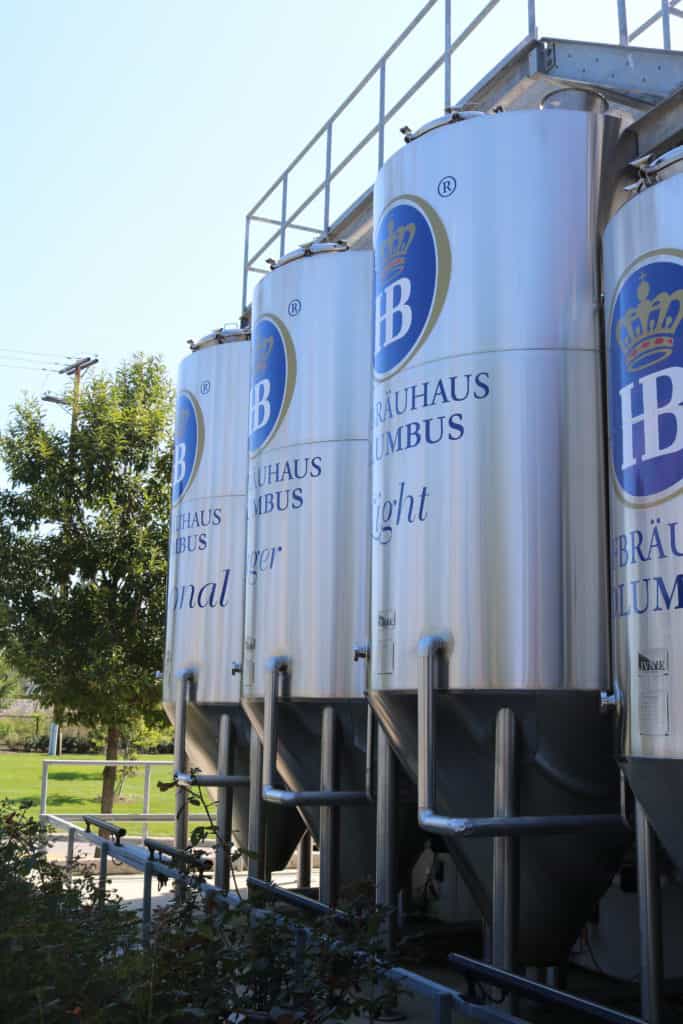 As you might have guessed, it’s busy season right now for breweries like Hobrauhaus, producing about 20,000 liters of beer per month.  (in slower seasons they still make 10-15 liters/month). To break it down, that means they are making two to three 2,000 liter batches every week! For perspective, how much do you consume in a week? 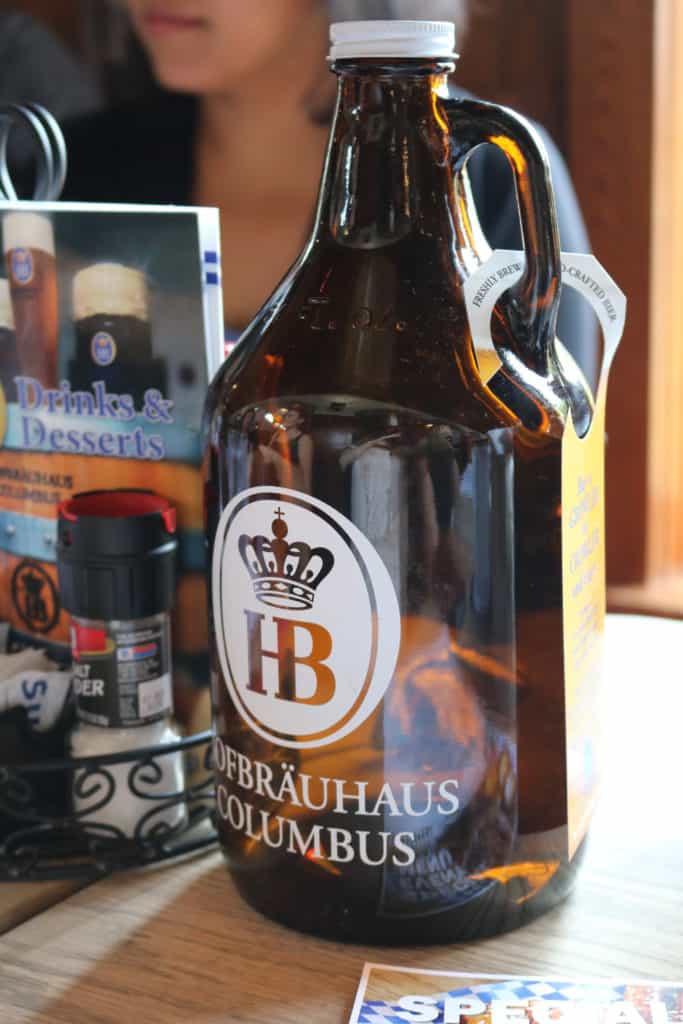 If you think the US made beer can’t possibly taste like the original in Munich, this again. In order to maintain the flavor, all of the ingredients except for the water are imported from Germany. Granted, the water can impact the flavor but I think we can all agree that importing water for brewing beer would be insane (especially being in a city where another big brewing company who-shall-not-be-named already spent the money to install a water system for the entire city making our water ideal for brewing beer). 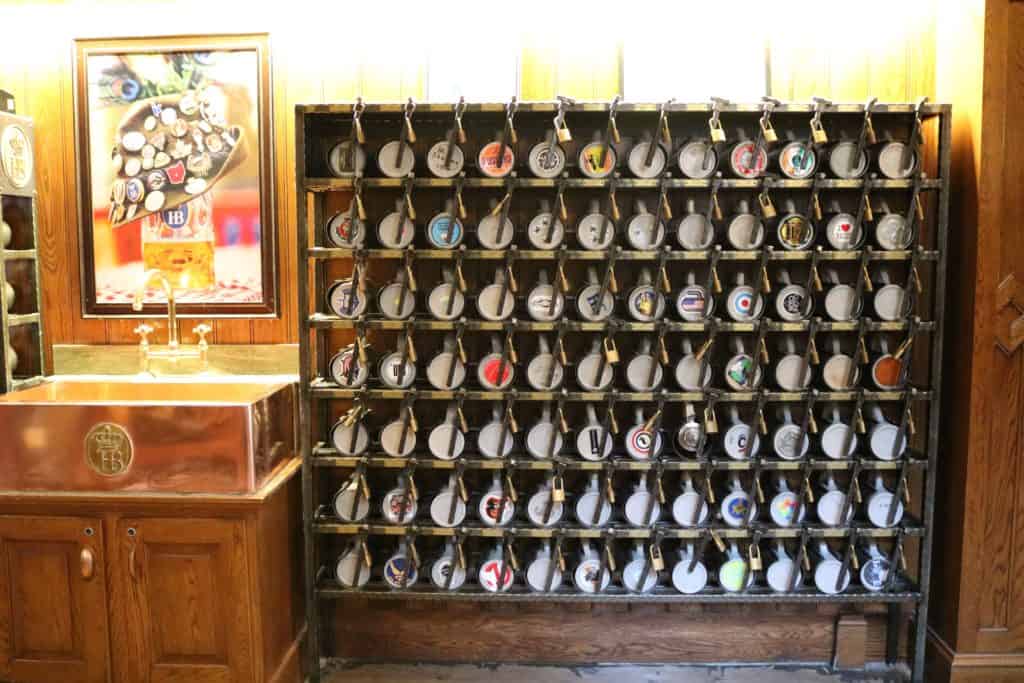 Other fun facts that I cannot work into a conversational manner: 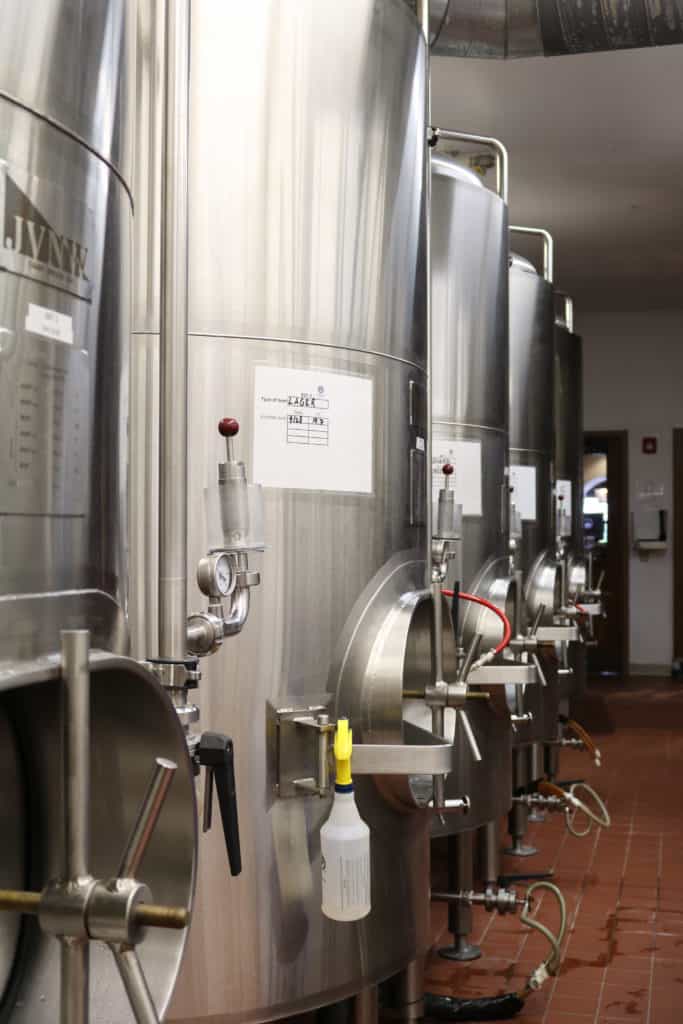 Bier käse, please!! I’m glad to know that you have a good brewery nearby. I actually need to get back to Dayton, OH because of a brewery – which I hope is doing well. They hadn’t been fully licensed several years ago when we visited. It’s called Carillon Brewery, and they were going to be brewing the old fashioned way, producing only cask-conditioned beers. Thought you might be interested since Dayton is not far from Columbus…

If I ever find myself in Dayton I will look it up! I’ve only been once and it was for a flight haha. I keep saying I need to explore outside of Columbus more. I’ve done a little bit but there’s so little time to go everywhere!

The other day I was craving creamy cheesy food something fierce. But deciding which dish would satisfy that craving was another issue. Mac and cheese? Broccoli cheddar soup? Then I remembered this dish I made with friends on NYE 10 years ago and it was settled. Nostalgic, definitely creamy cheesy, and ready in about 30 minutes. Which means it was ready before my hanger could take hold. Although I did nearly eat two servings 😅.


Get the recipe linked in my bio.

Who wants an eggnog snickerdoodle blondie!? No I'm not in denial about eggnog season being over, I just had a tiny bit left and couldn't resist. Even my eggnog loving but not loving it in baked goods husband was obsessed with these. Meanwhile I pretty much only like it in baked goods and also loved them. Basically they are people pleasers 😉.


Recipe linked in my bio I'm case you also have leftover eggnog!

I may have received these products for free from @influenster and @Cheetos in exchange for my honest review, and the truth is I would have bought these to try regardless.


I don't know if you all realize my love for Cheetos, but I have shared several recipes incorporating this beloved cheesy snack on my blog over the years (linked in my bio for proof) and yes one of them is mac and cheese.


This boxed version is obviously way easier than homemade tastes just like Cheetos. My only negative comment is that the sauce almost completely absorbed into the pasta making it less creamy than others but still enjoyable. Especially topped with more Cheetos 🧡.


They also have flaming and jalapeno versions but I am a classic Cheetos person. My husband will gladly claim the other two 😜.

What, you don't have eggnog leftover in your fridge from the holidays still? If you don't I suppose you can make these overnight slow cooker eggnog cranberry steel cut oats with regular milk but damn if they aren't delightful with eggnog. Also can we talk about the amazing aromas you'll wake up to? 🤤