This isn’t your every day cinnamon swirl bread, but maybe it should be. Peanut butter bread with a chocolate swirl is a serious game changer. 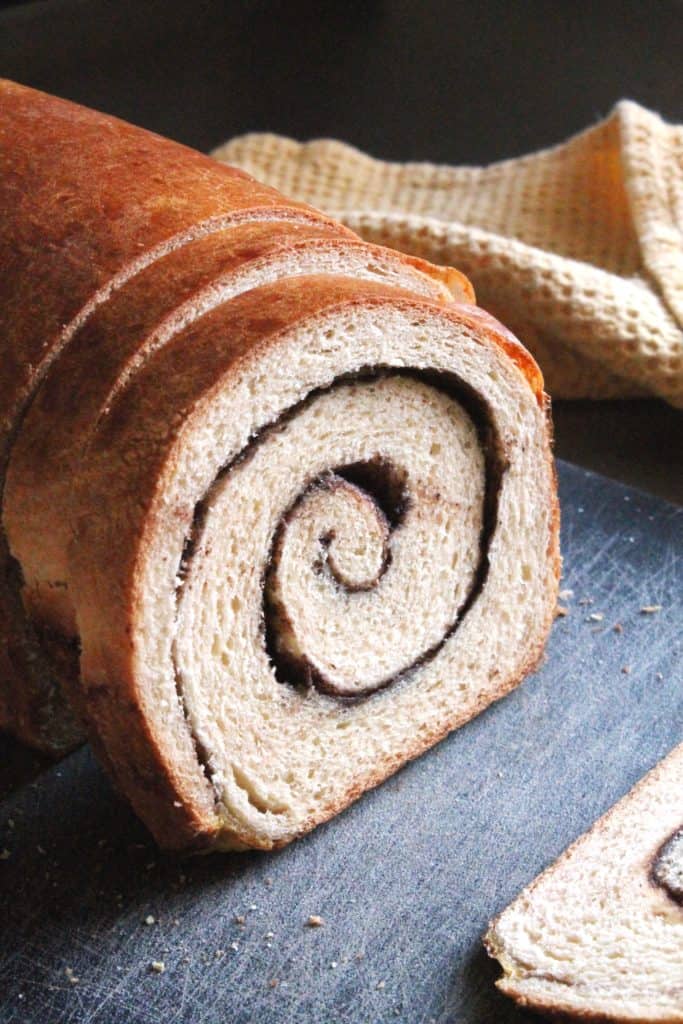 This might be my first ever swirl bread guys. And by might I mean it is (well other than Potica). But this is no ordinary cinnamon swirl bread, in fact there’s no cinnamon at all. So what is that beautiful swirl you ask? CHOCOLATE. But you know I didn’t stop there. If the day of the week is any hint (or you know, the title of this post), your first guess should be that there is peanut butter in there somewhere and you would be right! I present to you, peanut butter chocolate swirl bread! 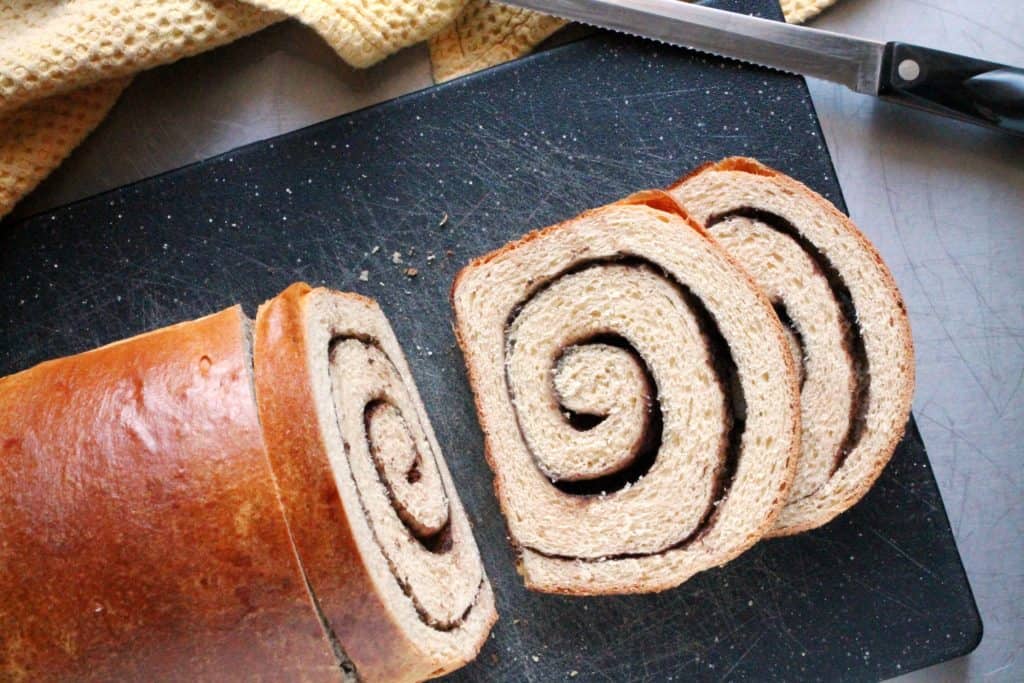 When you’ve been blogging for almost 7 years, about half of them featuring #PBChocSat posts during football season, and the other half just full of peanut butter and chocolate on the regular, you start running out of peanut butter and chocolate recipe ideas. Or do you? I actually have a file saved of all my random ideas that I think of and now is the time for them to be unleashed! 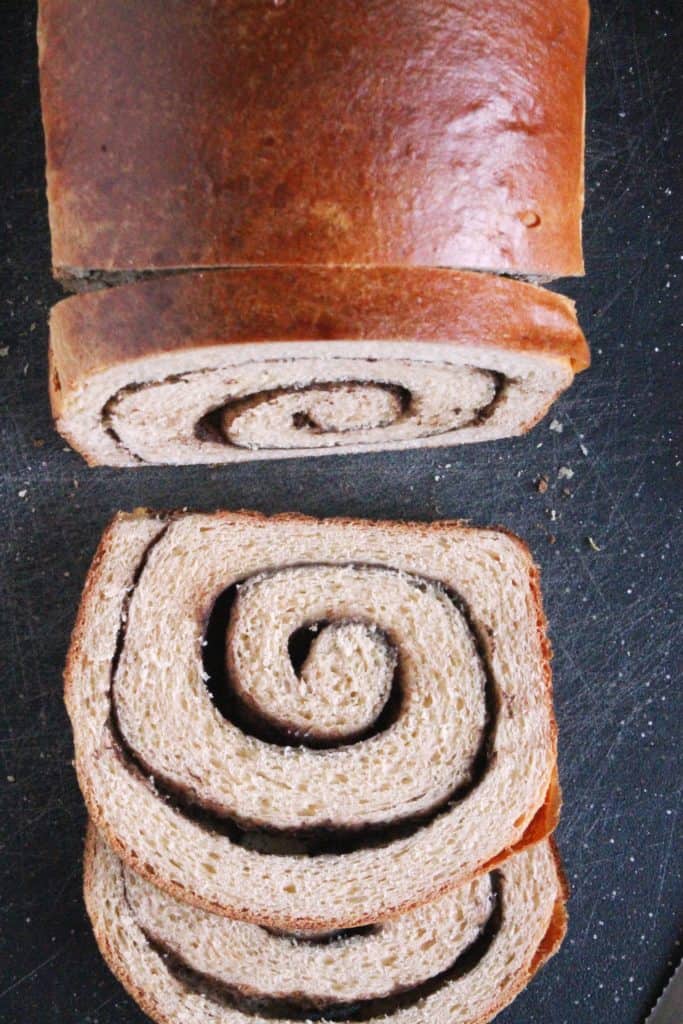 This was actually one of my more recent ideas and all it involved was taking a recipe for cinnamon swirl bread, adding powdered peanut butter to the dough and substituting the cinnamon for cocoa powder. While the flavor profile ends up being more subtle than you would initially suspect, it’s still a knockout and I couldn’t be happier with how it turned out. Well, ok I wish I had rolled my dough up a little tighter to avoid the gaps, but that’s being nit picky. 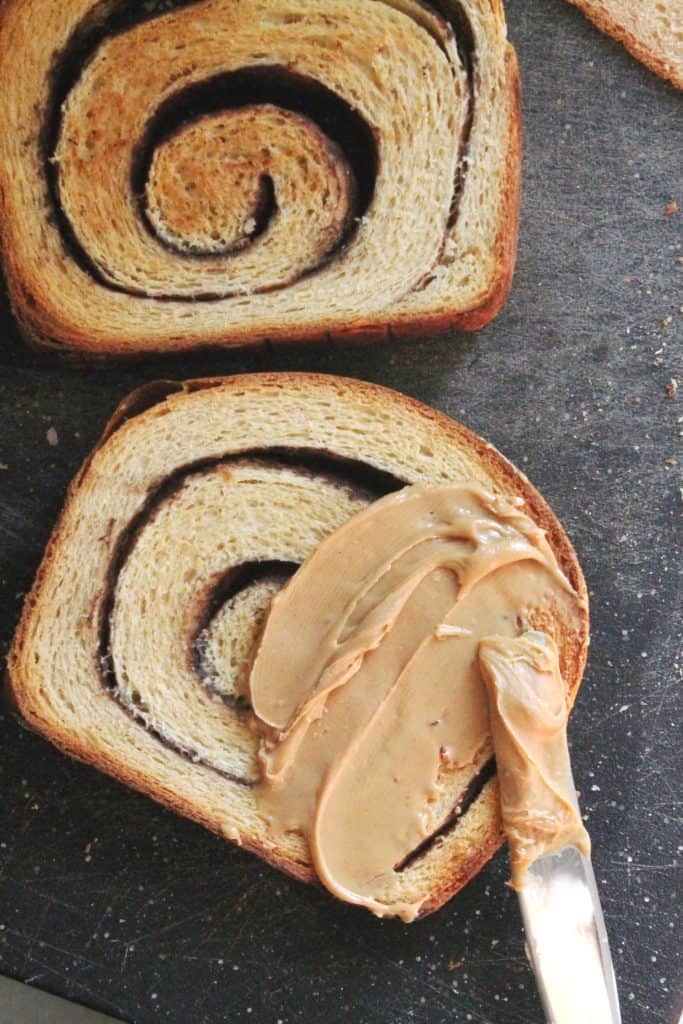 If you’re feeling like there isn’t enough peanut butter and chocolate going on, feel free to smear them with some peanut butter or chocolate-hazelnut spread. Or both, no judgement. It is #PBChocSat after all. Use the leftovers to make French toast? Heck yea! As for football, today the Buckeyes are played Army West Point. Here’s to hoping it won’t be as painful to watch as last week’s game against Oklahoma. 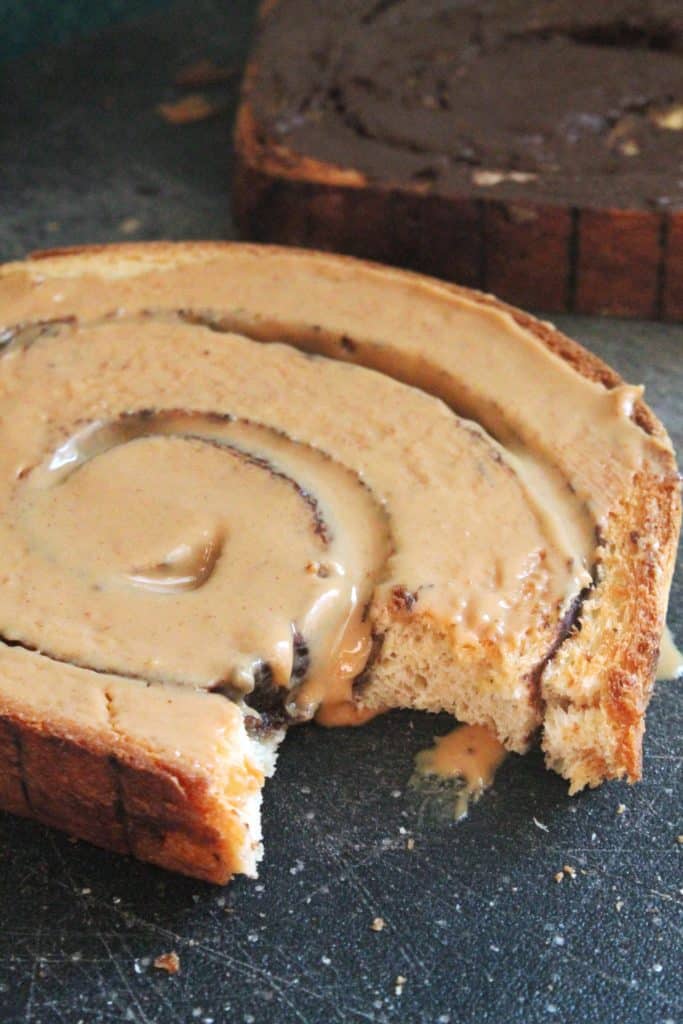 In other news, Bob and I visited yet another venue this morning and it is high on our list of potentials! Afterwards we went to the Worthington Farmer’s Market before stopping into Worthington Jewelers where my ring is being designed (which happens to be right in the mix of the Farmer’s Market). It’s finalized guys! Bob got approved for financing to pay for half of it so now they can get to making the real thing, not just computer images. Wee!!!

1 egg and 2 Tbsp milk, beaten together

Source: Adapted from The Pioneer Woman.

best. swirl bread. EVER! I adore your love of choc + pb. It’s part of why we’re friends :P

I baked this up for the weekend and oh my gosh is it crazy good! I used half whole wheat and it still came out super soft. I love using the PB2 powder in this..the peanut butter taste was spot on and the chocolate swirl was just enough to compliment the PB flavor. The dough was so easy to work with too!

My husband and two sons could not get enough of this. Thank you for a fantastic recipe that will be made often in this bread loving family!

Awesome I’m so glad you loved it! Also that you were able to sub in some whole wheat flour.

I don’t make a lot of bread, but the next time I do, I’m adding peanut butter and chocolate swirls. GAH! The bread looks so freaking good!

<3 oh the peanut butter and chocolate recipes will be aplenty!

Have you been spying on my dreams? Because this is preeeetty much what goes on in there. Cannot get over how good this looks!

Maaaaybe O:-). You sure do have some tasty dreams! Stay tuned cause I post a new peanut butter and chocolate recipe every Saturday throughout college football season!

Wow! That is so beautiful. We are peanut butter fiends at our house and I can’t wait to try this.

Thanks Malini! Report back when you do.

I read through this recipe and don’t see where to add the peanut butter? (I read through it carefully 3 times.) Important note: last week I discovered that Sprouts carries PB&Co. powdered peanut butter! Didn’t see the chocolate one, but I’m glad they have the brand. I’m glad to know that you will finally be getting your ring – can’t wait to see it.

You know, I realize this doesn’t go with your chocolate/PB theme for Saturdays, but chocolate and cinnamon would be a nice combination for the swirl.

Good catch! I edited the recipe and it now says to add the powdered peanut butter into the flour. And yes PB&Co is the brand I used!

Mmmm yes that would be yummmy, good thing there are 6 other days in the week ;-).