Put your experimental pants on and open your mind to dessert deviled eggs. It’s like chocolate pudding served in an edible bowl! 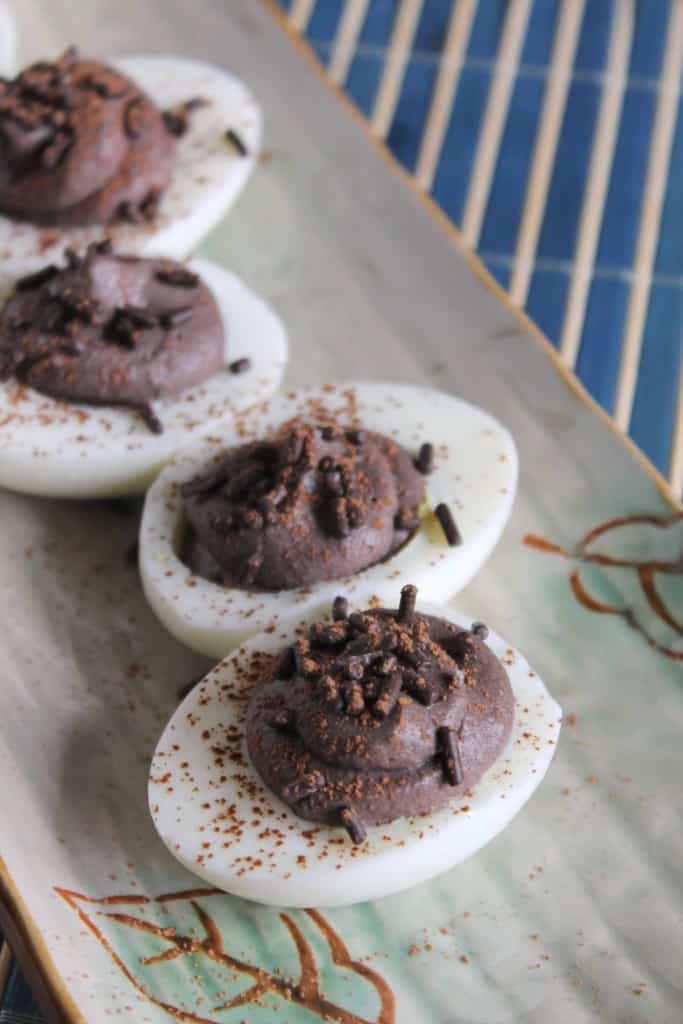 If you follow me on Twitter and/or Instagram then you got a glimpse into the eggified week I had last week (if you don’t follow me, what are you waiting for!?). Thanks to the Ohio Poultry Association, myself and a team of awesome bloggers from Ohio or nearby states were shown the ropes of the egg and poultry business right here in Columbus, OH. We met some of the egg and poultry farmers right here in Ohio that supply places such as Bob Evans and The Guild House with their eggs and poultry and of course they joined us for all of the eggciting events! 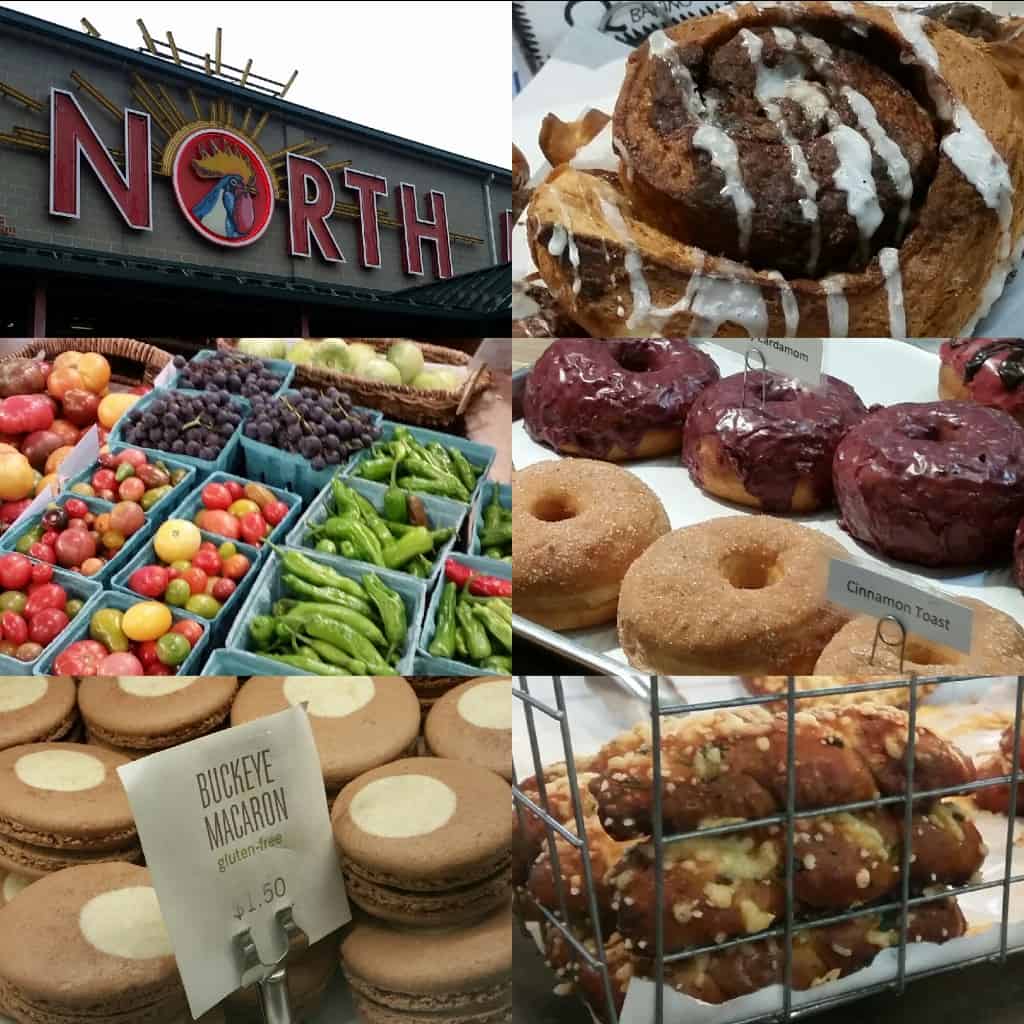 But first since I arrived a little early, I eggsplored the North Market with Julia (A Cedar Spoon) and Shelley (Two Healthy Kitchens) where we indulged in some pre-dinner snacks such as an asiago herb & cracked pepper pretzel and a blackberry cardamom doughnut. And of course took all the pictures. If you live with or know a food blogger you understand the trials and tribulations of being around us when we are taking pictures of food. Just imagine a group of us together, because that’s exactly what happened when all eleven of us were gathered together starting with a progressive dinner in the beautiful German Village featuring Max & Erma’s buffalo chicken dip, Lindey’s eggs, Stauf’s coffee (which I skipped and went to the Book Loft next door), and finished with Koko Tea Salon & Bakery cupcakes and Graeter’s ice cream for dessert! Hey there are eggs in cupcakes and ice cream too. 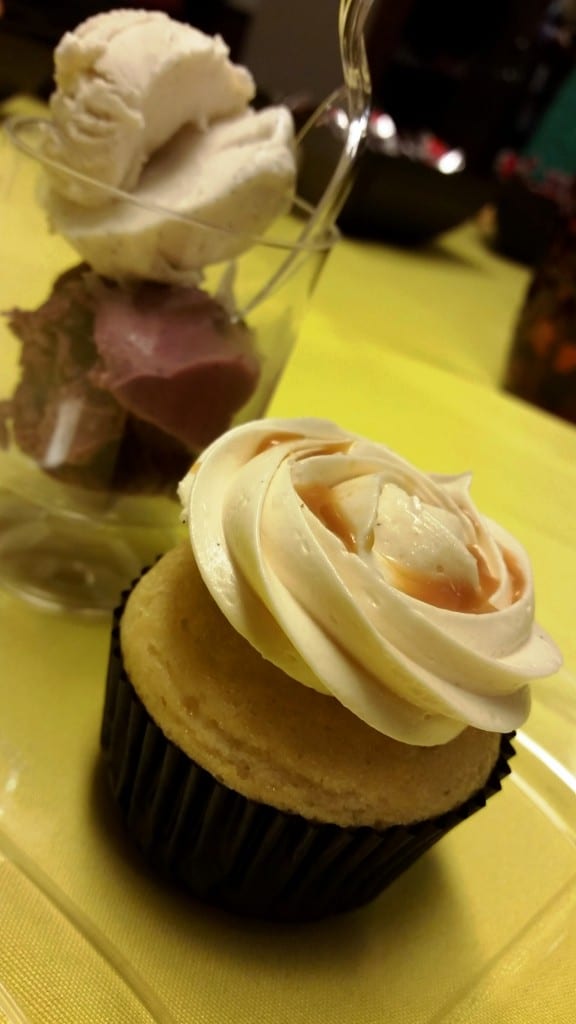 The following morning we ventured out to the Bob Evan’s headquarters (which is actually not far from where I live currently – I saw currently because I am moving closer to work in 2 months) where we got to tour their eggcellent test kitchen and then had eggs cooked to order by the head chef himself – no big deal I’ll just be over here wishing this was every day real life. After a hearty breakfast the group was whisked away to the Franklin Park Conservatory for lots of deviled egg variations and learned how to make the perfect omelet. Sadly I missed this part of the adventure as I had an experiment that needed my attention at work and was swooning over all the pictures everyone was sharing on social media. But I was able to reunite with them for dinner that evening and oh man was I ever so eggstatic that I didn’t miss that. 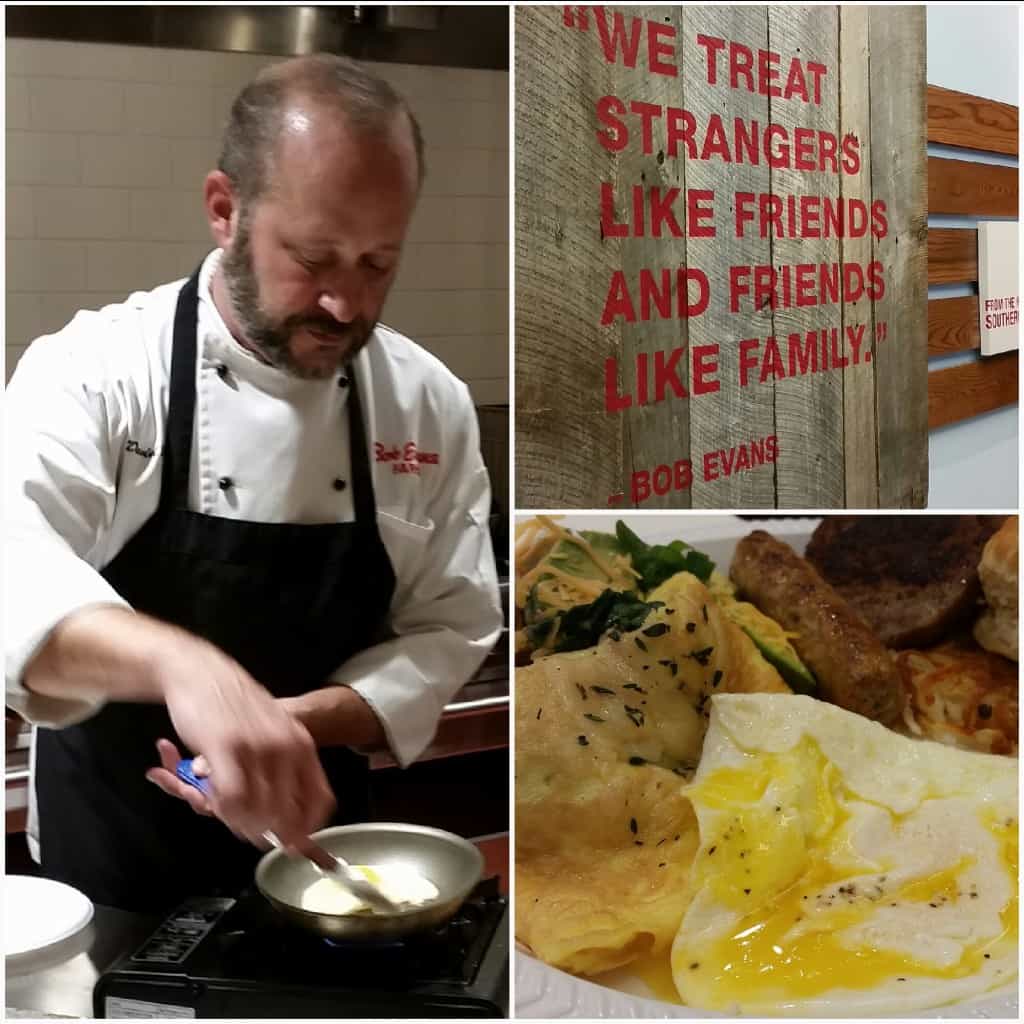 We had dinner catered by Sidercar at the beautiful Jorgensen Farms. Seriously, if anyone is getting married in Ohio you need to check this place out as a venture. And possibly book Sidecar to cater it while you are at it. From the candied bacon, gorgonzola chicken salad crostini, and stuffed Belgian endive for appetizers, to the Sidecar chopped salad, harvest succotash, roasted fingerling potatoes, bacon wrapped turkey breast stuffed with pear hash, and to seal the deal pumpkin creme brulee and fresh berries with Russian cream, they could do no wrong. Oh and did I mention they had root beer available? It’s like they knew I was coming… 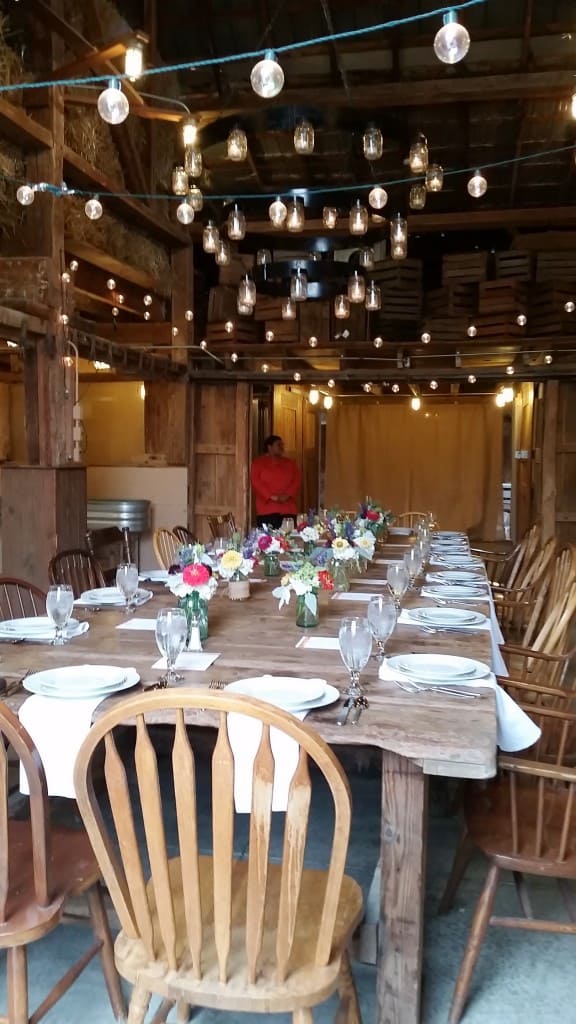 On the morning of our last day we walked over from our hotel, the Hilton downtown (yes I had a mini staycation), to The Guild House which had been on my list of places to eat in Columbus ever since it opened earlier this year. They greeted us with a sparkling blackberry beverage which I didn’t catch the name of and after we got our fill of pictures trying to capture the beauty that is the inside of this place we started our meal with no less than DOUGHNUTS. Glazed, strawberry cheesecake stuffed, and chocolate caramel doughnuts to be exact and let me just say I may need to go back for that strawberry cheesecake one (btw the doughnuts are normally a lunch menu item, they served them to us special for breakfast). Apparently you can order them by the dozen which is a dangerous fact to reside in my brain, but I digress. This sugar onslaught was followed by some savory in the form of eggs on toast, the most eggceptional smoked chicken hash, and finished off with a tour of their kitchen. 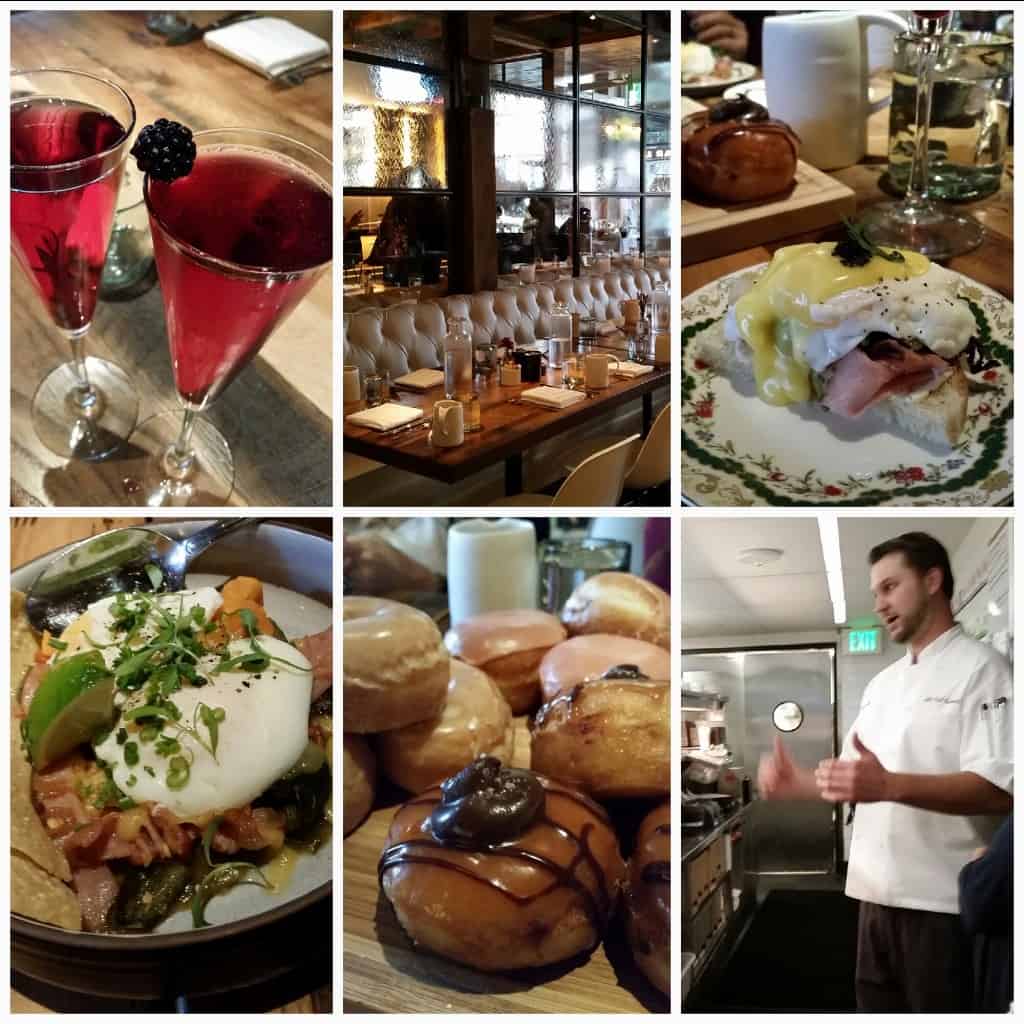 And then we had to say our goodbyes and I went back to real life in the lab. Sad face. It was so great spending time with the farmers, chefs, Inspire PR/OPA group, and of course all my fellow bloggers! I may have swooned a little inside upon meeting Jessica (A Kitchen Addiction) as I’m pretty sure I have been following her blog since before I had my own. Everyone was incredibly friendly and easy to get along with and there were even a few other from right here in Columbus that I had not met yet! Be sure to check out all these ladies and their wonderful blogs: 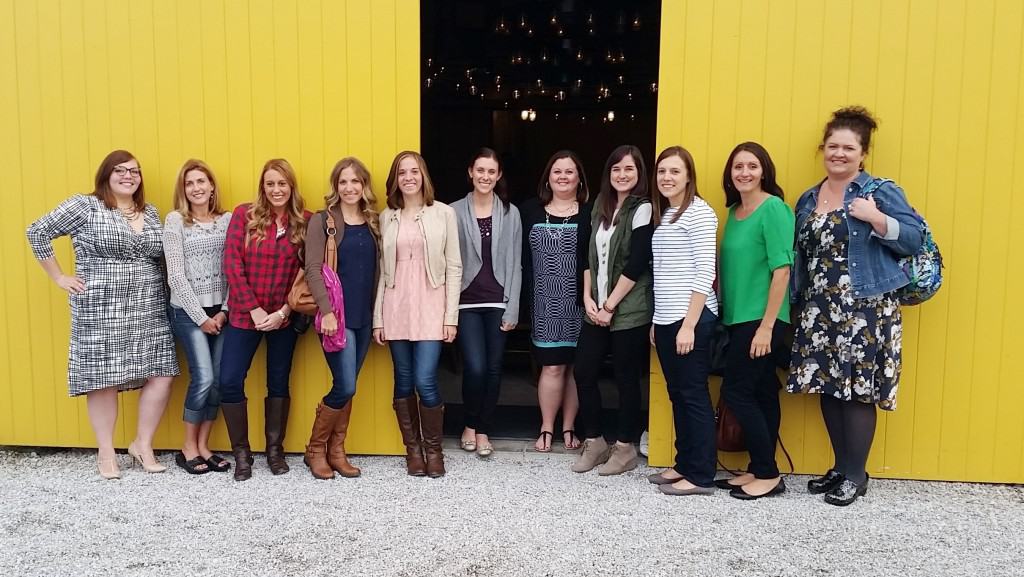 P.S. Why do I look so awkward? I think it’s because I am standing sideways along the barn door.

But my story is not yet over! A few days later we got the recipes for almost everything we ate, woohoo! You have no idea how ready I am to recreate Sidecar’s stuffed turkey and The Guild House’s smoked chicken hash. But first since I missed out on all the eggs at Franklin Park, I decided to whip up one of the more eggtriguing ones that involves chocolate. You know, cause it if #Choctoberfest after all! I know at first a chocolate deviled egg sounds all kinds of wrong but give it a minute. It’s basically chocolate pudding inside of an edible bowl that resembles unsweetened opaque white jell-o, except it’s an egg white. Dessert with some protein anyone?? 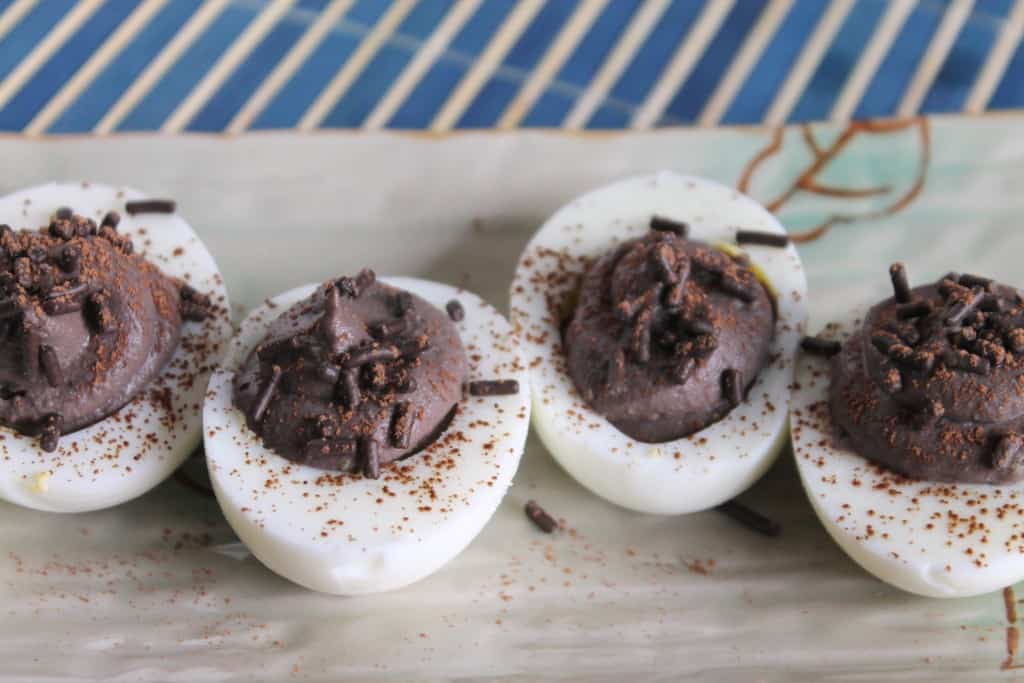 Who counted how many times I “eggified” a word?

Made something from the blog?

I love that you shared the chocolate deviled eggs. I had many friends on my personal Facebook page think this sounded like less than a great idea, LOL Your pictures of them does them justice… unlike my Instagrams of them under the harsh lighting. It was such an amazing experience, I want to go back and do it again! And thanks for the link to my blog :) I’ll be posting about our trip (including the pumpkin creme brûlée) soon.

After being sad I missed out on the eggs I had to try the most inventive one myself! I’ll be looking forward to reading your post!

You’re hilarious! The vision of all of us descending with cameras like paparazzi, surrounding a poor, unsuspecting plate of food?!?! So true … so true! We missed you on “deviled eye” day, but I’m really glad you gave these chocolate ones a try! Aren’t they just incredibly interesting and so much better than you’d imagine? Who would’ve thought??? Well, I guess egg guys would’ve thought. But anyway, so much fun reading your recap of the trip! And mmmmmmm … the yummy memories … :D

I think that you definitely get the blue ribbon for most unique and adventurous recipe. It looks as if you had a great trip.

Okay, I think you win “weirdest recipe of #Choctoberfest” haha! But I’m intrigued, I’m going to have to try these. :)

These are the best-sounding deviled eggs I’ve ever encountered. I like the idea of making something sweet that’s usually savory. And sometimes the other way around, too. As for deviled eggs, I’ve only found one savory version that sounds appetizing, so it’s nice to find another one that would be worth trying.